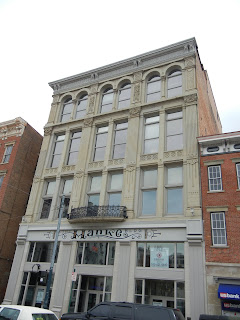 The Hanke Building was constructed in 1876 to serve as the Hanke Department Store founded by Herman Adolph Hanke, who had operated his department stores since 1876. This Renaissance Revival building was designed by local architect Louis Piket and features a Beaux-Arts façade as well as a 3-story atrium. As a result of the Great Depression, the department store closed in 1933.

The great story behind this building is not only the history, but what can be accomplished when a group is dedicated to architectural preservation. In 1995, the Hanke Building was slated for emergency demolition and 3-days before the destruction of the building, the Stough Development Corporation stepped in and saved the building. The building was completely updated and renovated and today serves as retail and offices. The building is also on the National Register of Historic Places.