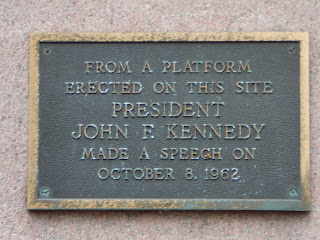 Just a little ways up the street from where Metrobot once stood there is a plaque on the side of a building not far from the entrance to Fountain News. This plaque marks a speech that President John F. Kennedy made at that site back in 1962.

I am a bit of a history geek so any type of sign that tells me what a president did or did not do at a specific location gets me all excited.

But I do have to question this sign a little bit. It is true that President Kennedy spoke at Fountain Square but according to the JFK library, the speech was on October 5, 1962 and not October 8, 1962 as the sign states. The JFK Library shows President Kennedy in the Oval Office on the day that the plaque claims he made the speech in Cincinnati.

But no matter who is right, it is great to stop and imagine what it would have been like to be on Fountain Square on that day in October listening to President Kennedy speak.

John F. Kennedy plaque
On 5th Street on the corner of 5th and Walnut, Cincinnati
Posted by grif at 11:18 PM