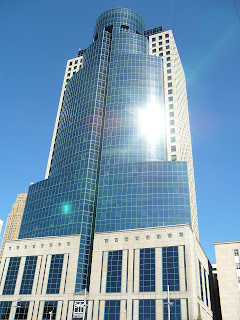 This is another one of the very recognizable buildings that makes up the Cincinnati skyline. Built in 1990, this postmodern building is often referred to as the, “Darth Vader” building by the locals because of its dark exterior. Named after newspaper publisher E.W. Scripps, this building was the tallest building built in Cincinnati during the 1990’s and is the media headquarters for the company of the same name.

Scripps Center
312 Walnut Street, Cincinnati
Posted by grif at 9:49 AM