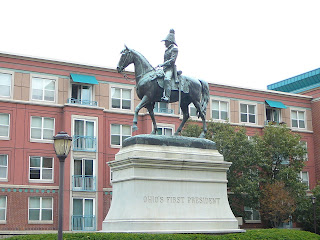 William Henry Harrison started his career in the military and was stationed at Fort Washington in Cincinnati. He was also the military leader in the battle of Tippecanoe where he got his nickname, “Old Tippecanoe”. As commander of the army of the Northwest, he fought in the War of 1812 and became a war hero from that. In his political career, he served as Governor of the Indiana Territory as well as a U.S. Representative and Senator for Ohio. In 1840, Harrison was elected the ninth President of the United States and the first President from Ohio. After serving 31 days in office, he died of pneumonia becoming the first President to die in office. Harrison is buried West of Cincinnati in North Bend, Ohio.

The statue of Harrison is in Piatt Park and is made of bronze with a granite pedestal. It is an equestrian statue depicting Harrison as a General. The statue was created by Louis Rebisso and was dedicated in 1896.