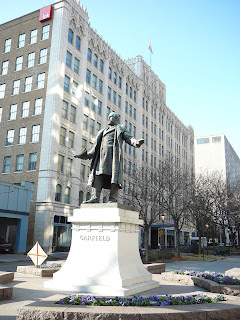 James A. Garfield was the 20th President of the United States taking office in 1881 and was assassinated in the same year, 200 days after taking office. President Garfield had the second shortest Presidency in history after President William Henry Harrison who by coincidence has a statue erected in his honor at the opposite end of Piatt Park. Prior to being president, Garfield served as a Major General in the Union army during the Civil War and fought at the Battle of Shiloh. Garfield also served as an Ohio State Senator and a United States Congressman for Ohio.

The Garfield statue is located at the East end of Piatt Park at Garfield Place and Vine Street. The statue was created by Charles Niehaus and unveiled in 1887. At one time, the statue stood in the middle of the intersection of Eighth and Race Street on a taller pedestal but since that time it has been place on a lower pedestal and moved out of the street because it annoyed horse drawn carriage and automobile drivers.
Posted by grif at 10:33 PM