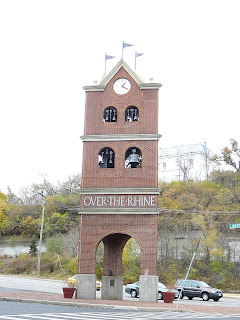 Under the city’s gateway program and with assistance from the Verdin Company, the city of Cincinnati erected this carillon in 1996. The tower serves as a gateway or, “front door” to the city and is a monument to the long history of bell making by the Verdin Company, which started making bells and clocks in 1842.

In addition to the bell tower, there is a small landscaped park area which lays between Liberty and Thirteenth Street. Future plans include adding an amphitheater adjacent to the tower.

Gateway Bell Tower
Reading Road and Liberty Street, Over The Rhine
Posted by grif at 12:41 PM

Email ThisBlogThis!Share to TwitterShare to FacebookShare to Pinterest
Labels: Over The Rhine 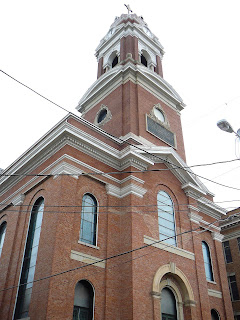 St. Paul’s Roman Catholic Church was built in 1850 and was a German speaking parish. The building is a brick Romanesque structure with Doric pilasters, a Renaissance tower with a Pope’s Mitre cupola and gilded cross, and large stained glass windows that were made in Germany. In 1899 a fire destroyed everything but the walls and stained glass windows of the church but the church was quickly rebuilt and in 1900, it was rededicated. In 1975, the church closed its doors but in 1981 the Verdin Company purchased the church and surrounding buildings. The Verdin company received an award from the Ohio Historical Society for the restoration and adaptive use of the church. Today the church is the Bell Event Centre which can be booked for banquets and receptions. The space of the church is also used as a bell and clock museum.

The Church and area around 12th and Pendleton Street are part of the St. Paul Church Historic District and was placed on the National Register of Historic Places in 1974.

Email ThisBlogThis!Share to TwitterShare to FacebookShare to Pinterest
Labels: Pendleton, Places of Worship 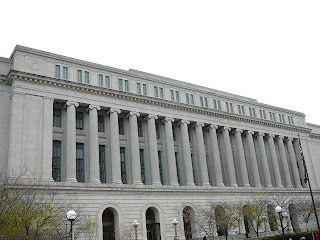 The original courthouse was destroyed during the Cincinnati Riots of 1884 by an angry mob which was dissatisfied over the verdict given to a man who was accused of murder. The courthouse on Main Street and Central Parkway was built in 1919 and is the sixth courthouse built for the county. Designed by architects Rankin, Kellogg & Crane, it has a Greek Ionic style made of limestone and tall columns. Inside the lobby you will find memorials dedicated to those who lost their lives in the riots of 1884. When it was first built, it was used to house the jail in the attic space until a new jail was built on the corner of Sycamore and Central. There is an enclosed skywalk between the jail and courthouse used to transport prisoners from the jail to the courthouse for their court appearances. Today it is used for the courts and court related offices and holds the law library of the Cincinnati Law Library Association. 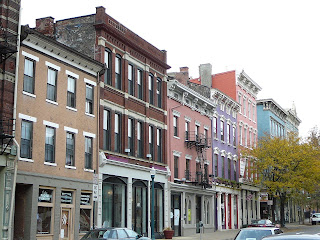 The area of Main Street between Central Parkway and Liberty Street is lined with brightly colored Italianate buildings and over the years the make-up of this area may change from time to time, but no matter what, there is always something to so or do.

Through the 1980’s Main Street had a collection of artists taking residence. It was an area where artists could practice their craft because of the low rent. In the 1990’s, Main Street was an entertainment district filled with bars and restaurants. There were plenty of bars to pass in and out of. Some of the bars changed names and ownership over time but the atmosphere remained the same. In the late 1990’s this area of Main Street was known as, “Digital Rhine” due to the number of dot-com businesses that started in the area. But with the dot-com boom came the dot-com bust by 2001. Due to the unfortunate circumstances of the riots in 2001, many people stopped going to the bars on Main Street and ultimately many of these places closed down. Main Street started on a decline at this time and had seen its better days.

With the revitalization of Over The Rhine came a new lease on life for Main Street. Not only is Main Street coming back as an entertainment district with bars but you will also find many restaurants, shops, and art galleries. With the Final Friday gallery walk which happens on the last Friday of the month, Main Street and the surrounding areas are becoming to be known more for an art district than an entertainment district.
Posted by grif at 1:15 PM

Email ThisBlogThis!Share to TwitterShare to FacebookShare to Pinterest
Labels: Over The Rhine 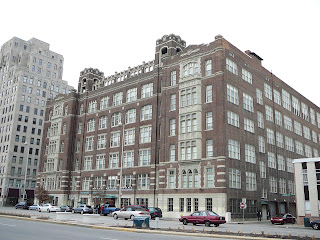 Designed by Samuel Hannaford & Sons and built in 1911, the Emery Theatre which is also known as the Emery Auditorium was home to the Cincinnati Symphony Orchestra from 1912 through 1936 and the Ohio Mechanic’s Institute/College of Applied Science until 1989 when the school moved to the University of Cincinnati Campus in 1989. The 1,600 seat theatre was known for its great acoustics and has been compared to Carnegie Hall in New York. Many famous conductors have performed in this theatre like John Philip Sousa and George Gershwin who performed Rhapsody In Blue with the Cincinnati Symphony Orchestra shortly after its premeire in New York.

In 1977, the “Mighty Wurlitzer”, a 2,000 pipe organ was moved from the Albee Theatre to the Emery. In 1999, the organ was dismantled for repairs and the same year, the Emery Theatre was closed for renovations.

In 2001, the area which once was the Ohio Mechanic’s Institute/College of Applied Science was turned into 59 units of apartments and retail space opened at the street level. With a need for a mid-sized theatre downtown, the Emery Theatre is undergoing renovations and is expected to reopen in 2011. It is expected to be used by the Cincinnati Chamber Orchestra and the Cincinnati Men's Chorus.

Emery Theatre
100 East Central Parkway, Over The Rhine
Posted by grif at 9:03 PM 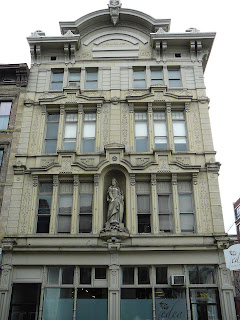 The Germania Building was built in 1877 by Heinrich Arminius Ratterman for his company, the German Mutual Insurance Company of Cincinnati. The building was designed by German architect Johann Best and is a Renaissance Revival structure with some very nice details like the tall sculpture of Germania, the symbol of German culture and spirit. At her feet lay symbols that represent art, learning, astronomy, architecture, and nature.

Ratterman is known not only for founding this insurance company but for writing many books, articles, operas, and journals. Some of which are still in use today by many historians.

Around the time of WWI, there was an anti-German sentiment in the country and many German institutes were forced to close, German newspapers were outlawed, and streets with German names were changed. At this time Ratterman changed the name of the company from its German name, Deutsche Gegenseitige Versicherungs Gesellschaft von Cincinnati to Hamilton Mutual Insurance which still operates under this name. Also during this time, the statue of Germania was renamed Columbia and was draped in an American flag and E Pluribus Unum was inscribed on the robe.

Today the building serves as offices and a flower shop.

Germania Building
1129 Walnut Street, Over The Rhine
Posted by grif at 10:40 PM 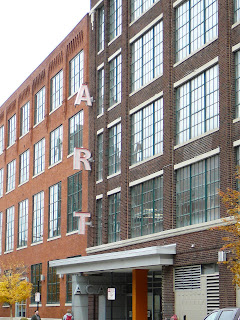 The Art Academy of Cincinnati was founded in 1869 as the McMicken School of Design and is part of the University of Cincinnati. By 1884, the Art Academy separated itself from the University and came part of the Cincinnati Art Museum. In 1887 their building is dedicated in Eden Park and their name changed to the Art Academy of Cincinnati. In 1973, the Academy began its separation from the Art Museum to become an independent school. By this time, the school had created a four year curriculum and by 1979 started offering a Bachelor of Fine Arts degree and the school moved to Mt. Adams. Over time, the school expanded more and more and started a Masters degree program. By 2005, the school received all of the necessary funding and their new home in Over The Rhine was completed and the new school year started.

Today, the Art Academy of Cincinnati is an independent college of art and design and is a leading school for arts in the country.

Art Academy of Cincinnati
1212 Jackson Street, Over The Rhine
Posted by grif at 9:48 PM