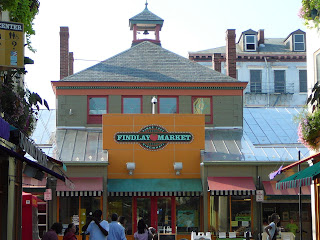 There was a time in Cincinnati when there were many open air and public markets around the downtown area. Findlay Market, which began its operations in 1852 is the only surviving marketplace of its kind in the downtown area.

Findlay Market was built on land which was donated to the city by former Mayor James Findlay and his wife Jane Findlay. The original cast and wrought iron frame structure was designed by Civil Engineer Alfred West Gilbert. The center tower was built in 1902 and the tower bell was brought from the Pearl Street Market in 1934 after that market closed. Over the years, the market has been renovated and expanded. The market is on the National Register of Historic Places. 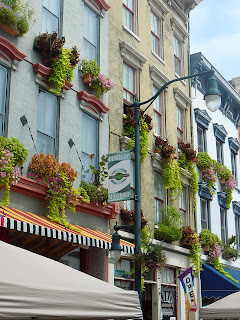 Findlay Market has a unique collection of stores and vendors who sell fresh produce, meats, cheese, spices, baked goods, flowers, and crafts. Along with these stores you will also find some great restaurants, which offer up anything from Belgian waffles, gyros, sandwiches, and more. In the summer, you can sit outdoors in the beer garden and listen to some live music or watch performers. There are many festivals to enjoy year round as well such as the Cincinnati Chili Cook-off, Bockfest, or the Reds Opening Day Parade. Findlay Market is one of those places that makes Cincinnati great.

Findlay Market
117 West Elder Street, Over The Rhine
Posted by grif at 7:19 PM

Email ThisBlogThis!Share to TwitterShare to FacebookShare to Pinterest
Labels: 1970 Tour, Over The Rhine 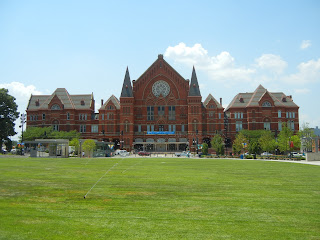 It was the vision of Reuben Springer to create a grand hall worthy of housing great musical event and industrial exhibitions. So much so that he offered to match the funds that the city put toward the building of Music Hall and it is believed that this is the first ever matching fund drive in the nation. In 1878, Music Hall was built.

Designed by Samuel Hannaford, Music Hall is of a Victorian design and has many beautiful features inside and out. The towering brick building features many turrets, gables, nooks, and garrets. Inside there is the Springer Auditorium, which is a grand auditorium with a beautiful domed ceiling with a very large, extravagant chandelier and an oil painting depicting the allegory of the arts by Arthur Thomas. This auditorium has over 3,500 seats and has a great old world charm in the design. Along with the main auditorium there is the ballroom, which is over 20,000 square feet and is used for expositions and trade shows. There are also two smaller meeting and reception spaces – Corbett Tower and the Critic’s Club.

The main foyer also serves as a gallery honoring those who have contributed to keeping Music Hall the beautiful space that it is. Walking around the foyer and floors above you will see the busts of prominent figures, composers, and patrons.

Music Hall is known as the home of the Cincinnati Symphony Orchestra, Cincinnati Pops, Cincinnati Opera, and May Festival Chorus but it has hosted many events over the years such as the Democratic National Convention in 1880 and the Cincinnati Industrial Expositions. Music Hall was once used for various shows, basketball games, and tennis matches as well. The hall served for the most part as a convention center until the Cincinnati Convention Center was built in 1967.

Another important figure in Music Hall history is J. Ralph Corbett, who in 1969 helped fund a major facelift to the building which helped keep Music Hall one of the most beautiful, impressive, and important buildings in Cincinnati. Music Hall became a National Historic Landmark in 1975.

Email ThisBlogThis!Share to TwitterShare to FacebookShare to Pinterest
Labels: 1970 Tour, 1996 Tour, Architecture, Over The Rhine 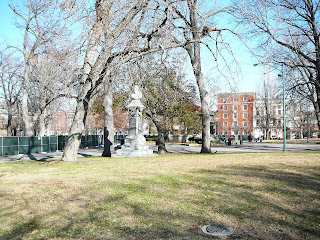 Across the street from the Hamilton County Memorial Hall and Music Hall is Washington Park. The area which is now the park was acquired by the city in 1855. Prior to it being a park, there were three cemeteries here. At the time the city was concerned about health problems that may arise from the cemeteries being there and the city had the remains relocated to Spring Grove Cemetery. In 1888, the park was the site of the Centennial Exposition of the Ohio Valley and the park was also used for many German-American festivals.

There are many unique features in the park such as a bandstand that was built in 1911 and is one of the oldest structures in the Cincinnati Park system as well as cannons from the Civil War and busts of military commanders.

At the time of this writing, Washington Park is closed to the public and undergoing a massive renovation. Once the renovation is complete, the park will be extended for the entire block between Twelfth Street and Fourteenth Street and between Elm Street and Race Street. The surface level parking will be removed and replaced by an underground parking garage giving more green space for the park. Some of its other features will be a playground, an interactive water feature, an area for performances and events, and a dog park. The renovation is expected to be completed by 2012.

Washington Park
Between Twelfth & Fourteenth and Elm & Race, Over The Rhine
Posted by grif at 9:09 PM

Email ThisBlogThis!Share to TwitterShare to FacebookShare to Pinterest
Labels: 1996 Tour, Over The Rhine, Parks 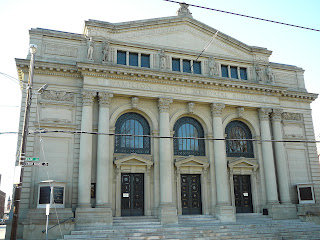 More commonly known as Memorial Hall, this building was designed by Samuel Hannaford & Sons and built by the Grand Army of the Republic and Hamilton County to honor the soldiers and sailors from the area. It is of a Greek Revival style and the cornices of the building have figures which represent soldiers from the Revolution through Spanish-American War. To the right of these figures is an inscription of the words from President Lincoln’s second inaugural address, “With Malice Toward None With Charity For All”. The hall also contains a 610-seat auditorium, which is still used to this day. Memorial Hall is on the National Register of Historic Places.

The hall is now home to the American Classical Music Hall of Fame, The Cincinnati Chamber Orchestra, and the MusicNow festival.

Email ThisBlogThis!Share to TwitterShare to FacebookShare to Pinterest
Labels: 1996 Tour, Architecture, Over The Rhine 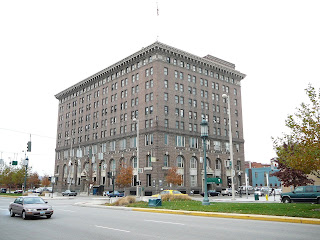 President Taft laid the cornerstone for the YMCA building in 1918. It is an Italian Renaissance style building and at one time, it was bordered by the Miami-Erie Canal on one side and during the construction of the subway, there was seepage in the lower level of the building, which caused the YMCA to close the swimming pool. The building is still in use by the YMCA today and contains a fitness center, heated pool, indoor running track, a full sized gymnasium and many more features.

Founded in 1848 by Sunday School teachers of Central Presbyterian Church, the Cincinnati “Y” is said to have been the first in the United States.