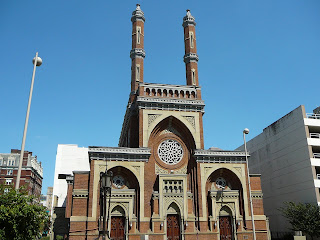 Originally called the Plum Street Temple, it is now known as the Isaac M. Wise Temple named after Rabbi Wise, the founder of Reform Judaism in America and Hebrew Union College. The temple was built and dedicated by K. K. B’nai Yeshurun of the Lodge Street Synagogue - the first Reform Jewish Congregation west of the Alleghenies led by Rabbi Isaac Mayer Wise from 1854 to 1900.

Built in 1866, the temple was designed by James Keys Wilson. It is a Moorish Revival style building with a tripartite façade, minarets, and beautiful arches. The interior is equally impressive with Neo-Gothic highlights as well as an array of colors giving it a bright feel.

The façade of the temple was copied from the Leopoldstädter Tempel in Vienna, Austria and many American synagogues have been inspired by this temple and Leopoldstädter. The Wise Temple is on the National Register of Historic Places.