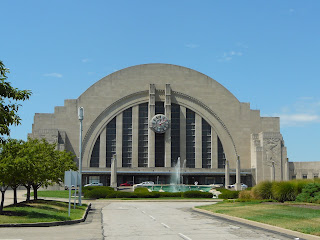 Built in 1933, Union Terminal was designed by Fellheimer and Wagner. It is an Art Deco building built on the land that was once part of Lincoln Park. The main building is a huge half domed rotunda built with limestone and glass. It is the largest semi-dome in the Western hemisphere. Inside you will find mosaic murals by German artist Winold Reiss, a gold and yellow arc following the top of the rotunda, and many other beautiful features that you need to see for yourself. In the front is a large illuminated fountain and pool. With the opening of Union Terminal, the city was able to consolidate 5 rail terminals. Union Terminal served 7 major railroads and could accommodate 216 trains a day. With air and auto travel becoming more and more popular, train service declined and by 1972 all train service stopped at Union Terminal.