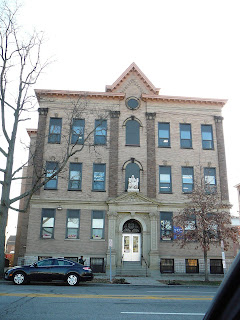 Founded in 1846, St. Joseph’s served as a Catholic church for the increasing number of German immigrants in Cincinnati and the overflow population of the Holy Trinity and St. John the Baptist churches. While the church originally had a German American congregation over the years it has become a parish for African American Catholics. In 1956 Father Clarence Rivers became the first African American priest of the Archdiocese of Cincinnati.

In 1960 the original church was torn down in order to widen Linn Street and a new church was built in 1965. The original convent, school house (pictured), and rectory are still standing.