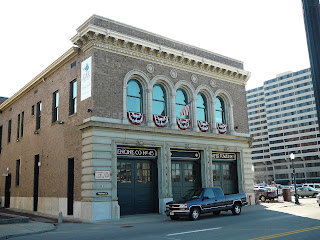 Firefighting in Cincinnati began back in 1794 when the first brush fire hit the city. Volunteer fire companies date back to 1808 and in 1853, Cincinnati became one of the first cities to have a paid municipal fire department. Also in 1853, two local inventors Able Shawk and Alexander Latta created the first successful steam fire engine which they named the, “Uncle Joe Ross” which would supply water while simultaneously throw a stream of water on a fire.

Built in 1906, the building housed Engine Company No. 45 until it closed in 1962. The building was designed by architect Harry Hake Sr. and is a Renaissance Revival style building. This firehouse was originally built to house horse-drawn fire equipment and was one of the busiest firehouses in the city. The building is on the National Register of Historic Places.

In 1980 the firehouse became the Cincinnati Fire Museum. The museum contains the history of firefighting in Cincinnati as well as artifacts from the early days of firefighting up through some modern firefighting equipment. There are many other exhibits and special events that take place at the museum as well as exhibits on fire prevention and fire safety. Group tours are also available.