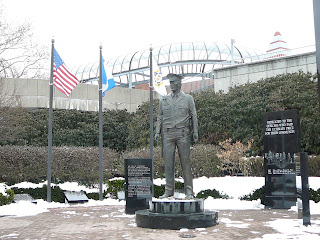 When visiting the police memorial you will find that it is a quiet, solemn place. It is a place where citizens, families, and police officers alike can go to reflect and honor those who have given their lives in the line of duty and have paid the ultimate sacrifice to protect and serve their community.

The memorial is bordered by granite tablets which are etched with images of police officers and engraved with the names of those who have been killed in the line of duty. There is an eternal flame that burns as well as the centerpiece of the memorial – a bronze statue on a polished black granite base of a police officer. The name at the base of the statue reads, “F. FELDHAUS” in honor of Frank “Pappy” Feldhaus, a Cincinnati Police Officer who spent 41 years on the force, retired in 1977, and passed away in 1980. Officer Feldhaus was known for his personable style and dedication to his work and the statue is a fitting tribute to the man.

Construction on the memorial began in 1988 with support from the Fraternal Order of Police, Queen City Lodge #69 and donations from the public and police officers. The memorial was dedicated in 1990. The statue of the police officer was made by local sculptor Kenneth Bradford.

Cincinnati Police Memorial
Corner of Central Parkway and Ezzard Charles (across from the District 1 police station)
Posted by grif at 10:48 PM