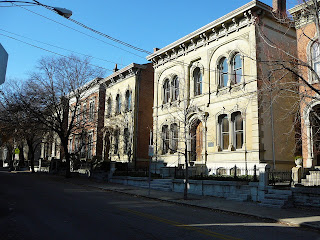 Known as, “Millionaire’s Row” in the 19th Century, Dayton Street was home to the Cincinnati wealthy. Brewers, pork packers, and elected officials alike called this beautiful tree-lined street tucked away in the corner of West End their home. Famous brewer John Hauck and former Cincinnati Mayor George Hatch are among the many who made Dayton Street their home.

Dayton Street has a nice collection of Italianate homes which were built between 1850 and 1890. These two to three story masonry detached town houses have many fine architectural details and are lined with stone posts and wrought iron fences. Dayton Street is designated as a historic district and is on the National Register of Historic Places.

Dayton Street
Between Central Avenue and Winchell
Posted by grif at 7:40 PM