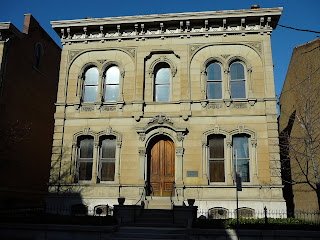 Note: The museum is now closed.

In 1864, John Hauck along with John Windisch founded the Dayton Street Brewery. The brewery was later renamed the John Hauck Brewing Company in 1882. The brewery was one of the most successful in the city. John Hauck was not only a brewer but was also served as the president of the Cincinnati Reds in 1866, president of the German National Bank, and even saved the Cincinnati Zoo by paying off its debts when the founder of the zoo passed away.

Down the street from his successful brewery is the Hauck residence. It is an Italianate house with a carved stone façade and inside there are large rooms with parquet wood floors, marble fireplace mantles, painted ceilings and beautiful woodwork throughout. Today the home serves as a museum, which is used as an example of how families lived during the late 19th century. The museum has furniture, memorabilia, and even toys from that period in time.