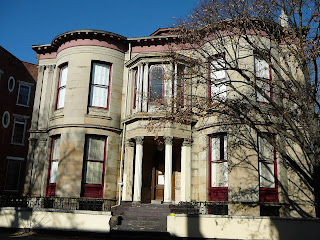 George Hatch was Mayor of Cincinnati during the Civil War. In 1862 with the threat of Confederate forces advancing to the North, Mayor Hatch announced that all businesses be closed and the citizens of Cincinnati come to the defense of the city. By later that afternoon, he retracted his proclamation and made the police provost-guards of the city. Despite the protests of the mayor, the Army created the Black Brigade of Cincinnati and they built fortifications and helped defend the city. Hatch, a Pro-Southern sympathizer was ousted as mayor and left the city for Florida. George Hatch is the only mayor that has no known photograph or portrait.

The Hatch house was designed by Isaiah Rogers. It is a Greek Revival style home with two story bow windows, a style based on architecture found in Brighton, England. It also features Corinthian columns on the front façade. The house is on the National Register of Historic Places.

The home in recent years has received grants for renovations and was to be turned into a museum about Hatch, Cincinnati’s Civil War history, and the Black Brigade. Today the house is up for auction.