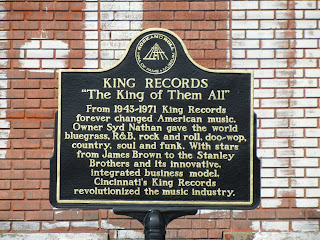 In 1943, Syd Nathan started King Records using some money he borrowed from his family. King started off as a Country music label and was commonly referred to as a hillbilly label with the slogan, “If it’s a King, it’s a hillbilly” and had popular Country and Bluegrass artists like Reno and Smiley, The Delmore Brothers, and Moon Mullican.

By 1945, Syd Nathan saw that there was a need for an outlet for African-American artists and created the Queen Records label which later became known under the King label. With the addition of R&B to the King Records repertoire, Syd signed artists like Hank Ballard, Johnny “Guitar” Watson, and the most popular artist under the label, James Brown.

With the addition of more artists like local favorite Bob Braun, Petula Clark, Cowboy Copas, The Ink Spots, and the Stanley Brothers (to name a few), King became known for Country, Bluegrass, R&B, Doo-Wop, and Soul and soon became known as, “The King of them all”.

Not only did King act as a recording studio for its artists but their facility was used for mixing, mastering, pressing, and shipping. Syd Nathan employed both whites and blacks at the company making it one of the first integrated companies in Cincinnati.

Syd Nathan passed away in 1968 and King Records was acquired by Starday Records. The label changed hands several times until it was eventually sold to Gusto Records.

In 2008 a marker was placed at the original location of King Records in Evanston to commemorate King’s place in music history.