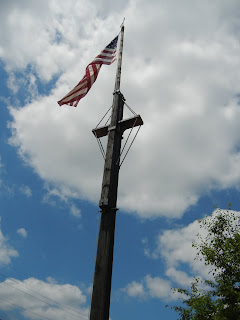 The Carthage flagpole is a 50-foot tall wooden structure. It is made of two sections with one wider at the base and a narrower lightweight top. They are attached together by a metal plate, pins, and braces. The flagpole has been left unfinished and untreated and is a local historic landmark.

Email ThisBlogThis!Share to TwitterShare to FacebookShare to Pinterest
Labels: Carthage 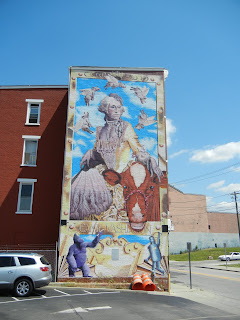 The ArtWorks mural in Camp Washington is a fun painting depicting not only the namesake of the neighborhood, but also some of the icons of the community. The mural shows George Washington’s head on the body of a woman in a Victorian dress with flying pigs circling about. The mural represents icons that are part of the neighborhood like the tin man from Jacobs Manufacturing, the gorilla from Schenz Theatrical Supply, and a cow that escaped a local slaughterhouse in 2003. 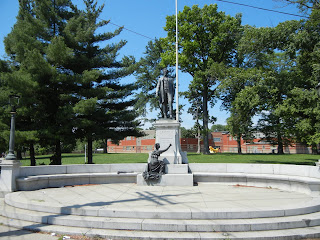 The Lincoln and Liberty statue was unveiled in 1902. The statue was a gift to the city and Cincinnati Public Schools from Captain Charles Clinton, a Civil War veteran. It was created by artist William Granville Hastings. The statue stands about 19 feet tall and features President Abraham Lincoln on a granite pedestal with Liberty kneeling below with a quill stretched out from her right hand writing the words, “With malice toward none” which was taken from Lincoln’s second inaugural address. There is a copy of the Lincoln and Liberty statue in Bunker Hill, Illinois and replicas of Lincoln standing on his own in Sioux City and Jefferson, Iowa. 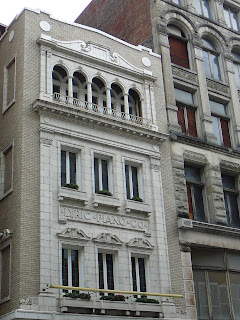 The Lyric Piano Company was a subsidiary of the Ralph Wurlitzer Company and Lyric Pianos were made from 1909 until its demise in 1937 due mainly to the Great Depression.

In the 1950’s the building housed a dressmaker and in later years there were a succession of hamburger restaurants. In 2007 the building was purchased and redeveloped into a mixed-use space with retail on the first floor, office space on the second, and a residential unit on the third and fourth floor. 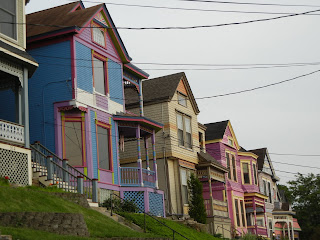 Columbia-Tusculum is Cincinnati’s oldest neighborhood and was founded in 1788 when Benjamin Stites and 26 settlers arrived to create the village of Columbia. Around 1815, the settlers started to move up Tusculum Hill to avoid some of the flooding from the Ohio River and it was at that time that Columbia-Tusculum was born. In 1873, the town was annexed by the city of Cincinnati. The Columbia-Tusculum Historic District contains homes from the late 1700’s to the mid 1800’s as well as the homes that have best identified with the town – the painted ladies.

These painted lady homes are painted with up to 5 different bright colors and are usually Victorian and sometimes Queen Anne homes but it is common to see other styles of homes in the area with the same type of color palette. The homes can be found on almost any street in the area with a large collection of them up on the hill on Tusculum Avenue. These homes make the area a very colorful and unique part of Cincinnati.
Posted by grif at 6:46 PM

"A Postcard from Home" 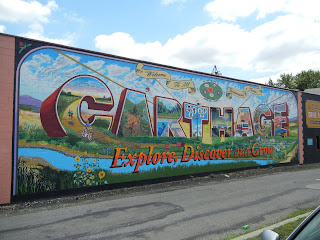 The ArtWorks mural in Carthage serves as sort of a welcome sign for the neighborhood. Designed to look like an old fashioned postcard, the mural depicts many of the things that make up the town like the county fairgrounds, train yards, and as tribute to veterans and firefighters as well as showing the residents at play. 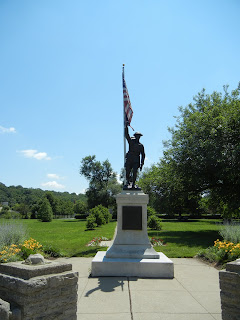 Camp Washington was once the muster and drill grounds for the First and Second Regiment of the Ohio Volunteers and was an important military location during the Mexican-American War. Camp Washington was also the host of the first Ohio State Fair in 1850. By the 1930’s it had become the home to stockyards and manufacturing in Cincinnati. 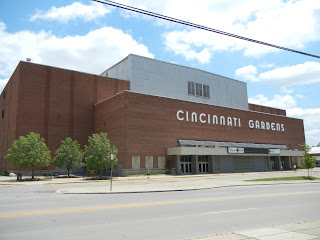 Cincinnati Gardens opened in 1949 and at the time it was built, it was the seventh largest arena in the United States. The Gardens was modeled after Maple Leaf Gardens in Toronto and seats 11,000 fans. Over its existence, the Garden has seen major sporting events from hockey, boxing, basketball, wrestling, concerts, and political rallies. The Gardens hosted performers like Elvis and The Beatles and in 1960, the Gardens saw its largest attendance with a Nixon campaign rally of 19,000 people. The Cincinnati Gardens was home to the first hockey team in Cincinnati – The Mohawks as well as the original home to the Cyclones and Mighty Ducks. It was also home to the Cincinnati Royals, Cincinnati’s only NBA team. The Gardens saw boxing matches with hometown legend Ezzard Charles as well. 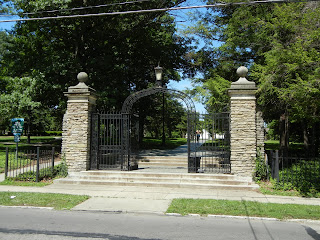 This beautifully landscaped 4-acre park is located on the site of the home of Charles Fleischmann, the founder of the Fleischmann Yeast Company and father of Cincinnati Mayor Julius Fleischmann. Fleischmann’s heirs gave the land to the city in 1925 and the park was expanded in 1976 when an adjacent piece of land owned by the Salvation Army was purchased.

The park has the largest ginkgo tree in the state along with an ornate Iron Gate entrance topped with a gaslight on Washington Avenue. There is also a stone path that leads down to a maze of evergreens 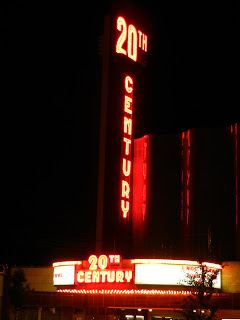 The 20th Century Theatre opened in 1941 and was a movie theatre. The first film shown at the theatre was, “Blood and Sand”. The theatre is a Neoclassical Moderne style designed by Fred W. Stritzel and was the first air conditioned theatre in Cincinnati.

The movie theatre closed in 1983 and sat vacant for almost a decade until it was purchased, renovated, and opened back up as a flooring store in 1991. Approximately a year later it saw use as a church and in 1997 the 20th Century became an entertainment venue once again. Today it hosts many concerts, parties, and receptions. In 2010, the sign outside was lit up once again. 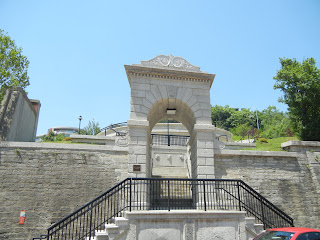 The Riverview Playground Entrance was once a gateway for the Marine Hospital, which stood at the base of Mt. Adams. The hospital was torn down in the early 1900’s but the entrance stayed when the site was converted to the Riverview Playground. Also known as the, “Good Friday” arch, it remained in its original place until around 1988-89 when it was dismantled and placed in storage. It was around this time that the construction of the Adams Landing condominiums started.

When repairs and expansion of the steps to Mt. Adams began several years ago, the arch was taken out of storage and put back together to serve as the entrance to Mt. Adams from the base of the hill. The Riverview Playground Entrance is designated a Cincinnati Historic Landmark. 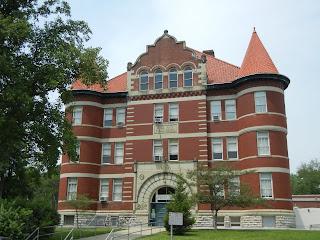 The Hyde Park Public School was built in 1901 and designed by architects Edward H. Dornette and Gordon Sheppard. It is a 3-story Romanesque Revival with twin turrets, high gables, and a red tile roof with some very detailed designs around the entryway. A 2-story, Colonial Revival style gymnasium designed by Tietig & Lee was added in 1927. 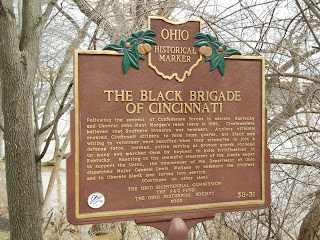 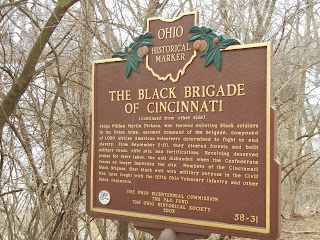 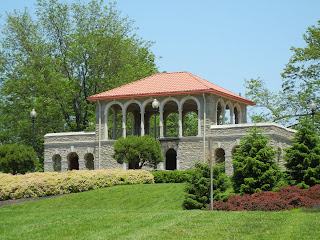 Frederick H. Alms Memorial Park was created in 1916 as a gift from his wife Eleanora. Alms was part owner of the Alms & Doepke Department Store and owner of the Hotel Alms. The park is situated on Mt. Tusculum, which at one time was inhabited by Native Americans who called it Bald Hill due to the fact that the area was cleared so they could keep watch over the Columbia settlers in the valley below. The land was also once owned by Nicholas Longworth and was used as a vineyard. One of the entrances to the vineyard tunnels can still be seen today. 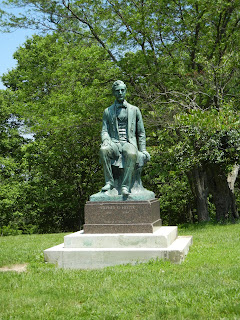 The 94-acre park has amazing views of Lunken Airport to the East and the Ohio River to the South. There is an Italian Renaissance Pavilion that was designed by Stanley Matthews and Charles Wilkins Short Jr. as well as a seated statue of Stephen Foster, the songwriter famous for Oh! Susanna, Camptown Races, and My Old Kentucky Home. The park has many hiking trails, picnic areas, overlooks, and a playground as well. 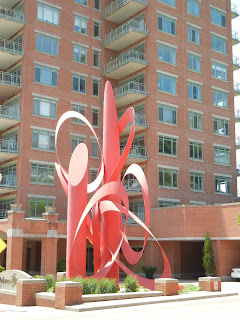 This sculpture was created in 1992 by Alexander Liberman who describes the sculpture as, “a hymn of praise soaring in space to elevate the spirit of the spectator”. The sculpture was purchased for the Adams Landing condominium project and dedicated by Allen G. Zaring, a developer.

Alexander Liberman has created many outdoor sculptures and some of his other works can be found in Pyramid Hill Sculpture Park.