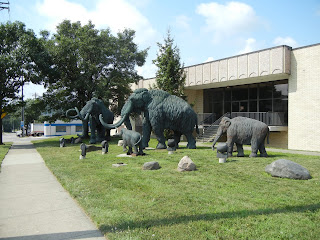 The Museum of Natural History dates back to 1818 when it was founded by Dr. Daniel Drake. It was around that time when John James Audubon worked for the museum as a taxidermist and created exhibits. The museum was located in several different places around Cincinnati until the Cincinnati Museum of Natural History and Planetarium was built in 1957 on Gilbert Avenue next to the Elsinore Tower. The museum and planetarium was designed by architect Walter W. Cordes of Cordes & Pressler & Associates.

The natural history museum contains a large collection of shells, minerals, fossils, birds, mammals, reptiles, insects, and pre-historic artifacts. It also contains a life-like cavern, an ice age exhibit, a replica wilderness trail, and a display depicting the life of early Native Americans. The planetarium had exhibits on the solar system and the night sky. It would feature special events such as laser light shows.

In 1990, the natural history museum moved to the Cincinnati Museum Center at Union Terminal. Many of the exhibits that were at the museum in Eden Park are still on display in its new home. By 2004, the old museum and planetarium were destroyed and the new WCPO-TV studio was built in its place. The sculptures of the mammoths (shown above) that were once outside of the museum can now be found in front of the Cincinnati Museum Center's Geier Collections & Research Center on the corner of West Fifth Street and Gest.
Posted by grif at 6:25 PM