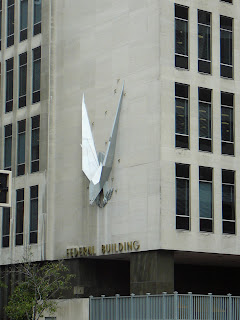 The 10-story, Modernism style building was built in 1964 and designed by architecture firms Potter, Tyler, Martin & Roth and Harry Hake & Partners. In 1984 it was named after John Weld Peck, an Ohio judge who served on the U.S. District Court for 5 years and the U.S. Court of Appeals for 27 years. It is the areas offices for many federal agencies including the Federal Executive Board, National Labor Relations Board, FBI, and the U.S. Citizenship and Immigration Services.