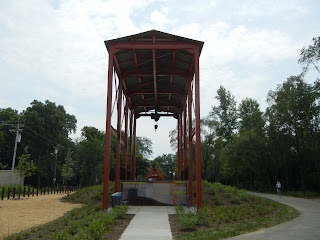 The Ohio River Trail is one of the latest additions to the Cincinnati riverfront. It is a mixed use hike/bike trail which will extend from one side of the city to the other. The trail offers scenic views of the Ohio River, the surrounding hills, and the downtown skyline. It will wind its way through historic parts of town and several parks.

At the time of this writing, several sections of the trail have been completed with the most recent being the trail which links the Lunken Airport trail loop to the Ohio River trail to Carrel Street and out to the Schmidt Playfields and Riverview East Academy. Along this newly created part of the trail is the Carrel Street station, a remodeled freight transfer terminal, which serves as a resting place (shown above).

The other section that has been completed is the trail which runs through Bi-Centennial Commons at Sawyer Point and Friendship Park. This section of the trail will soon connect to the new Riverfront Park which is under construction. The newly created park will have a Bike & Mobility Center which will give bicycle commuters access to bike parking, lockers, showers, and a repair center.

To the west, future plans call for a trail that follows the Ohio River all the way out to Indiana.

There are plans to extend a trail through Kentucky via the Purple People Bridge as well.
Posted by grif at 10:38 PM