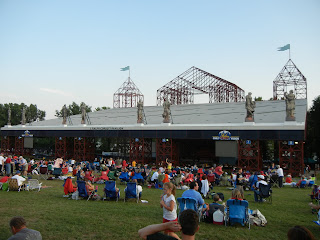 The official name for Riverbend is the Hulbert Taft, Jr. Center for the Performing Arts named after the founder of Taft Broadcasting, which is the company that donated the land. The center is situated along the banks of the Ohio River next to Coney Island and has two entertainment venues.

The largest venue is the J. Ralph Corbett Pavilion named after the founder of the NuTone doorbell company. J. Ralph Corbett was an avid supporter of the arts and donated money toward the construction of the center. The pavilion was built in 1984 and designed by Michael Graves. It seats approximately 5,000 people in the covered pavilion area and 10,000 on the lawn. The pavilion is a tent-like design and features billboard statues that represent musical muses. There is an arcing pergola bordering the lawn with concessions and facilities below. The PNC Pavilion was added in 2008 and is a smaller venue, which seats 4,100 people.

The Riverbend Music center features national acts of all genres throughout the summer as well as performances from the Cincinnati Pops and Symphony Orchestra.