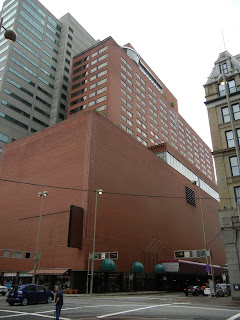 Built in 1948, the Terrace Plaza hotel was designed by architecture firm Skidmore, Owings & Merrill and developed by John J. Emery Jr. who also developed the Netherland Plaza Hotel in the Carew Tower. One of the senior designers was Natalie de Blois, which makes the Terrace Plaza one of the first hotels designed by a woman. This Modernist building was also one of the first buildings in the world with central air conditioning. This Modernist building received national attention for its design and featured space for smaller shops, a JC Penney and Bond department stores, and a 324-room hotel. The first seven stories are made up of the department stores and are windowless mainly for the central air conditioning.

The department stores closed by 1977 and since then the space where they once operated has been converted to office space and has been used for many different things. The hotel has operated under different owners since it began but now stands vacant. Only street level retail is open at this time.

The artwork from Saul Steinberg, Alexander Calder, Joan Miró that was once on display in the hotel can now be found at the Cincinnati Art Museum.