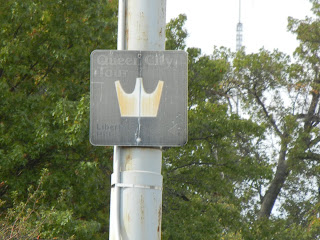 While I was out exploring the city I started to notice Queen City Tour signs where I least expected them. The signs did not follow the route of the tour that I knew but did lead me to some great sights around the city.

After a little research and a trip to the main branch of the library downtown, I found the original guide and map from the first Queen City Tour when it started in 1970. The 1970 Queen City Tour has a different route and while both the 1970 and 1996 tours have similar stops, there are several differences between the two. The 1970 tour does not cross the river into Kentucky. Instead, the tour goes out from the downtown area into several of the neighborhoods. Just like the 1996 tour, many of the sights still exist while others have been lost in time, some have moved and a few are still around, but have changed in name or purpose.

Over the next several months I will be covering the stops on the 1970 tour that I have not yet covered and at the end I will put together a guide and a map. Hope you find it interesting!
Posted by grif at 2:20 PM