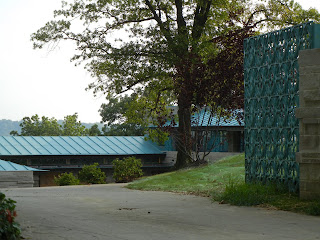 This part of the tour takes us down Grandin Road, Vineyard Place, and Tusculum Avenue. This area is a beautiful residential area with large homes, and river views.

Grandin Road is named for Philip Grandin, a banker who owned several hundred acres of land in the area. On this road you will find many beautiful homes created by many well-known architects and featuring a variety of styles. There is Lillybanks, a Tudor Revival home designed by John Scudder Adkins, the George Hoadley Jr. House which was constructed out of concrete and designed by Elzner and Anderson, and the Corbett Home (pictured above), a Post Modern home designed by John deKoven Hill, an apprentice and trusted associate of Frank Lloyd Wright.

Vineyard Place was most likely named for Nicolas Longworth’s vineyards that once grew in the area. Vineyard Place is probably best known for St. Ursula Villa School, a Catholic elementary school.

On Tusculum Avenue you will find many painted lady homes, the historic Victorian Stephen Decker Rowhouse built in 1889, and Alms Park.

The Grandin Road Viaduct, also known as the Grandin Road Bridge or the Delta Avenue Viaduct was built in 1905 and was the highest in the city at 150 feet over Delta Avenue. The viaduct once connected Grandin Road in Hyde Park to Grandin Road in Mt. Lookout. The wood and steel structure underwent many repairs in its lifetime and in 1975, it was torn down due to concerns over the safety and stability of the bridge. 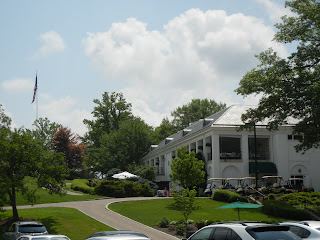 Established in 1895, the Cincinnati Country Club is one of the first 100 clubs of its kind in the United States. William Howard Taft was the first president of the club. Nicholas Longworth laid out the first 9 holes of the golf course. The full 18 holes were later designed by Robert White as a par 71 course with a total 6,304 yards from the longest tee. The club also has a clubhouse with a banquet hall, a swimming pool, and tennis courts. It is a members only club. 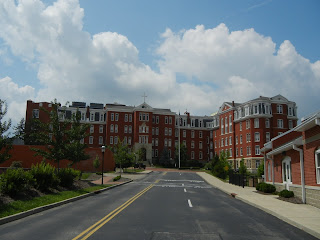 The main building was built in 1890 and designed by Edwin Forrest Durang. The building has been renovated many times over the years along with the addition of new buildings and a football field.

Holy Angels Church was founded in 1859 and was located on Grandin Road. The first church was a small stable on the estate of Joseph B. Foraker, the governor of Ohio from 1886 to 1890. The building was enlarged and turned into a parochial school by Reverend W.F.M. O’Rouke. In 1862 a Byzantine style church made of stone was built. By 1999 the church closed and the parishioners merged with St. Francis de Sales. In 2000, Springer School purchased the property and where the church once stood is now a playground. 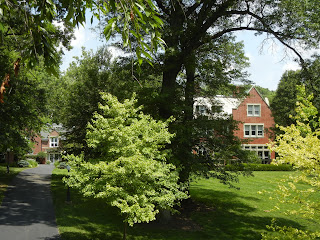 The Institutum Divi Thomae was founded in 1935 by Dr. George Sperti and the Archdiocese of Cincinnati. The institute was a graduate school for scientific research. Dr. Sperti served as the director of the institution and it was supported through the profits of his research and inventions. Among many of the advancements at the institute were Aspercreme, Preparation H, methods to freeze-dry orange juice, a sunlamp to enhance vitamin D in milk, and a burn ointment. In his lifetime Dr. Sperti held more than 120 patents. The institute closed in 1988 when Dr. Sperti became ill. 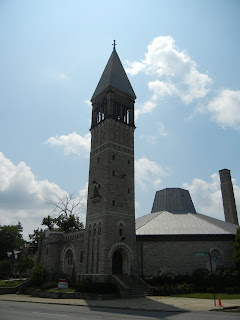 The congregation of the Seventh Presbyterian Church was founded in 1849. The Romanesque style building was designed by Samuel E. Desjardins and built in 1886. The church features a Venetian glass mosaic as well as a tower, which stands 150 feet tall and made of granite. The church was remodeled in 1923. In 2009, the church closed. 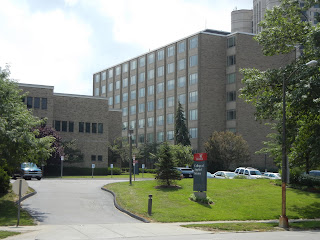 What is now the University of Cincinnati’s College of Applied Science once was Edgecliff College, a Catholic Women’s College founded by the Sisters of Mercy. Edgecliff started out as Our Lady of Cincinnati College in 1935 replacing the College of Sacred Heart in Clifton. In the 1970’s it became a coed school and in 1980 the college merged with Xavier University. In 1986 Xavier closed the campus and sold some of the land to a developer who built high-rise condos. The University of Cincinnati purchased the remaining buildings from the college. In honor of the college, Xavier University named their alumni hall Edgecliff Hall. 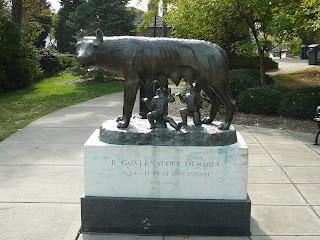 Located next to the twin lakes in Eden Park, the Capitoline Wolf is a bronze statue on a white marble and granite base given to the city by the Premier of Italy, Benito Mussolini in 1931. It was given in recognition to the city for being named after Roman hero Cincinnatus. It was originally presented to the city of Cincinnati in 1929 by the Sons of Italy, but after the ceremony it was discovered that a mistake had been made and Cincinnati received a much smaller statue than was intended. The correction was made and the rededication took place in 1931.

The statue is an exact replica of a statue that was created around the 5th Century BC. It depicts a she-wolf known as, Lupa Romana (Wolf of Rome) who in ancient mythology is credited for saving and raising Romulus and Remus, the founders of Rome and depicted on the statue being nursed by the wolf. The original statue still stands in the Musei Capitolini in Rome. 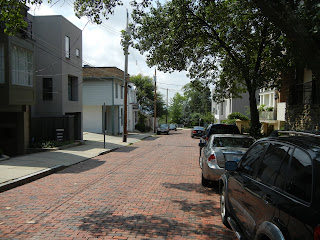 At the end of this street once stood 8 cannons that were mounted on parapets. This was to protect Cincinnati against a threat from Confederate forces during the Civil War. The battery that was once at the end of Fort View Place was called the Mt. Adams Battery. It was one of two sites in Mt. Adams that had cannons to defend the city. The other was called the Butcher’s Hill battery and it was located where Playhouse in the Park now stands. Mt. Adams was key in the defense of Cincinnati because of the views of the Ohio River valley and enemy forces could easily be detected from this vantage point. The Civil War ended and an attack never materialized. Not one single shot was fired from these locations.

Today Fort View Place is a quiet residential street and where the cannons once stood is a series of steps that lead down to Hill Street. 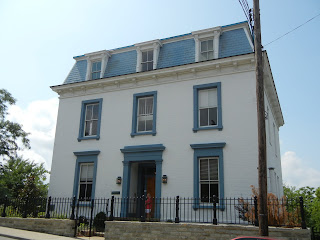 George Hunt Pendleton was born in Cincinnati in 1825. He served in the Ohio Senate from 1854-1856, in the United States House of Representatives from 1857-1865, and was a United States Senator from 1879-1885. An anti-war Democrat, Pendleton was the Vice Presidential candidate along side running mate George B. McClellan in 1864. The lost the election to President Abraham Lincoln. Pendleton was also married to Alice Key, daughter of Francis Scott Key.

After the Civil War, Pendleton was an advocate for the, “Ohio Deal” to pay back war bonds in paper money or, “greenbacks” instead of gold which was not a very popular idea. During his time in the Senate, he sponsored civil service reform based on merit and not political patronage. The legislation became known as the Pendleton Act.

The Pendleton House sits atop Prospect Hill and is visible from many parts of downtown and Mt. Adams. Built in 1870, this Second Empire style building was the lifelong home of George Pendleton. In 1882, members of the Civil Service Commission met at the home to draft the legislation that bears Pendleton’s name and the commission met here for the first two years of its existence. The home is on the National Register of Historic Places. 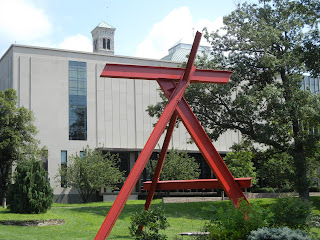 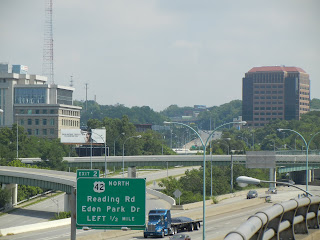 In the 19th Century, Deer Creek Valley was once home of the meatpacking business and it was here where Cincinnati was given the name, “Porkopolis”. The area, which was once populated with slaughterhouses and factories, is now part of Interstate 71 which cuts through the middle of it.

Visible from Interstate 71 and often believed to be part of the abandoned subway system is the Deer Creek Tunnel. Construction of the Deer Creek Tunnel began in 1881 by the Cincinnati & Dayton Railroad to connect with the Cincinnati, Lebanon & Northern Railway. The connection was intended to carry passenger and freight traffic and would have stretched for 9,000 feet under Walnut Hills. By 1855, approximately 3,500 feet of the tunnel was completed and construction ended due to a lack of funds.
Posted by grif at 1:49 PM