The Altenheim was established in 1891 by a group of wealthy Germans in Cincinnati as a home for elderly Germans. The home was open to men aged 65 and over. Located on the corner of Elland and Burnet, it was first known as the Deutscher Altenheim but after the start of World War I, it became the Cincinnati Altenheim. In later years the name changed to the Cincinnati Old Men’s Home and then the Home for Aged Men. Unlike many of the old aged homes at that time, The Altenheim let their residents live as if they were in their own private home. The home was purchased by Children’s Hospital and eventually demolished to make way for a parking garage.
Posted by grif at 10:48 PM

The Jewish Hospital was founded in 1850 during the cholera epidemic and out of a need to treat the poor in the Jewish community. The hospital was funded by a few Jewish philanthropists and is the oldest Jewish hospital in the United States. By 1890, a permanent home for the facility was built in Avondale. By 1974 the remainder of the original buildings were torn down and a newer, modern facility was built. In 1997, Jewish Hospital moved from its location on Burnet Avenue in Avondale to its current home on East Galbraith Road in Kenwood. Jewish Hospital is open to anyone and is often ranked as one of the nation’s top hospitals.
Posted by grif at 10:49 PM 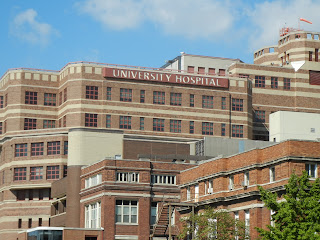 In 1915, General Hospital opened and served as a teaching hospital and care facility for the poor. Samuel Hannaford designed the 24-building campus and the areas were separated to prevent the spread of diseases that were thought to be airborne at the time. By 1960 the administration of the hospital was transferred from the city to the University of Cincinnati. By 1969 an emergency unit and high-rise main building was constructed and the majority of the original buildings except for a few were torn down. One of the few that still stands is the General Hospital Nurses Home, which is on the National Register of Historic Places. 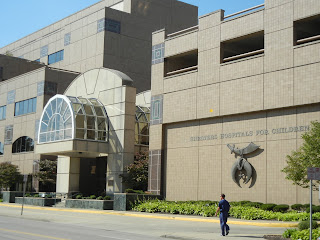 The Shriners Burn Institute opened in Cincinnati 1968 and is a 30-bed nonprofit pediatric burn hospital for patients 18 and under. The hospital in Cincinnati is part of the philanthropic efforts of the Shriners organization which has 22 hospitals across North America specializing in orthopaedics, burn care, cleft lip and palate, and spinal cord injuries for children.

Shriners Hospitals for Children
3229 Burnet Avenue, Avondale
Posted by grif at 10:12 AM 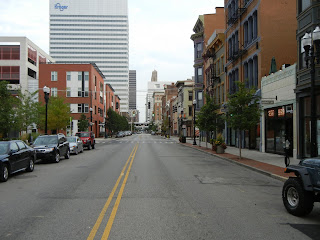 Vine Street is the primary north/south artery through the city and is the dividing line between the east and west side of Cincinnati.

Vine Street begins at Second Street to the south and makes its way through downtown passing by many famous Cincinnati landmarks such as Carew Tower, Fountain Square, The Cincinnatian Hotel, the Garfield statue in Piatt Park, and the Public Library.

Vine then crosses over Central Parkway into Over-The-Rhine and passing through the Gateway Quarter (shown above). From there it makes its way uptown. At Calhoun Street, Vine Street splits off and turns into Jefferson Avenue. Vine was split off in the 1970’s to make way for a shopping center and Jefferson actually runs parallel and is a bypass around a section of Vine Street in Corryville called, “Short Vine”. The “Short Vine” section contains shops, restaurants, and entertainment.

Jefferson Avenue and Vine Street meet up at Martin Luther King Jr. Boulevard and from there, Vine Street stretches through some of the outlying neighborhoods of the city and ends in Hartwell where it turns into Route 4/Springfield Pike.
Posted by grif at 11:16 PM 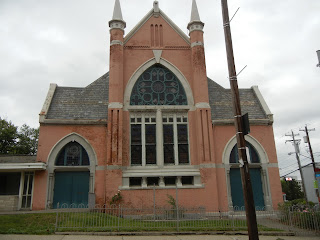 Built in 1851, the Gothic Revival style church originally started as a Protestant church that eventually became a Methodist church. The city helped pay for the church bell in order for it to be used in part as the community fire alarm and it served this purpose until 1875. The church basement served as the only school in the community until 1854. In 1893 the original congregation moved to a church on Maplewood Avenue and a German Methodist congregation moved from Vine Street to this church. When a fire destroyed the Maplewood Avenue church in 1957, the two congregations merged. The 3-story addition to the church was built in 1962. 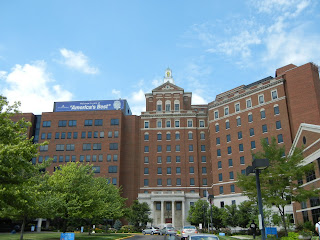 The Christ Hospital was started in 1889 when James Gamble and a group of Cincinnatians invited Isabella Thoburn, a missionary and nurse, to come to Cincinnati and teach others to care for the growing number of citizens living in poverty. Thoburn opened a 10-bed hospital on York Street in the West End called, Christ’s Hospital. By 1893 the hospital moved to Mt. Auburn and by 1902 a nursing school was started. In 1904 the hospital was renamed Christ Hospital. Today the hospital is a 555-bed facility and is recognized as one of the nation’s top hospitals. 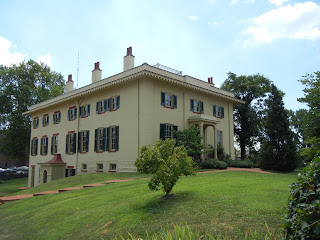 William Howard Taft (1857-1930) was the 27th President and 10th Supreme Court Chief Justice. He is the only person to have served in both positions and in his career served on the Ohio Supreme Court, was the Solicitor General, served on the U.S. Court of Appeals, was Governor-General of the Philippines, and Secretary of War as well. During his presidency he saw the passage of the 16th amendment, Civil Service reform, and made improvements to the postal service.

This site is the birthplace of Taft and where he lived until he left to attend college at Yale. It is a Greek-Revival home built in 1835. The home became a national historic landmark in 1969 and was restored to its original condition. It contains many of the Taft belongings with some of the original furnishings as well as some period pieces. The grounds also contain a visitor center and the Taft Education Center. It is the only designated national park in the city.