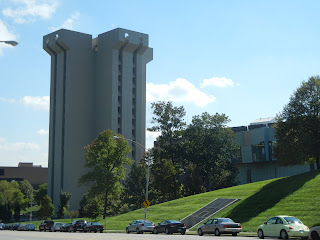 There are many notable alumni and faculty from the University of Cincinnati like former President and Supreme Court Justice William Howard Taft, architect Michael Graves, developer of the oral polio vaccine Albert Sabin, and sports legends Sandy Koufax and Oscar Robertson.

The University of Cincinnati is considered a top tier university and has many undergraduate and graduate programs as well as the College Conservatory of Music, the Design, Architecture, Art, and Planning (DAAP) program, a law school, college of medicine, nursing, and pharmacy programs to name a few. There are also two satellite schools – UC Clermont and UC Blue Ash, which was once Raymond Walters College. 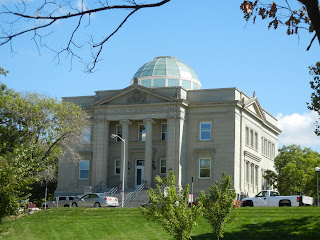 The main campus in the Clifton area is 137 acres with 63 buildings from notable architects like Michael Graves, Bernhard Tschumi, and Frank Gehry. Among the many buildings on campus are the Crosley Tower (top left) designed by A.M. Kinney Associates, the DAAP building (top right) designed by Peter Eisenman, and the Van Wormer Library (bottom) – the first library on campus.

The school also has an athletic program with the University of Cincinnati Bearcats, which competes in many different sports and is known best for their football and basketball teams.
Posted by grif at 11:43 AM 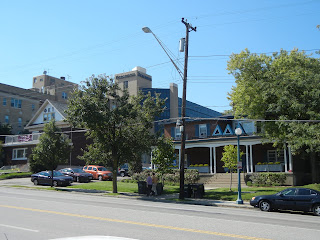 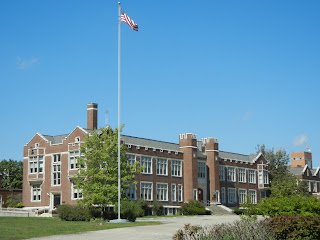 Hebrew Union College was founded in 1875 by Rabbi Isaac Mayer Wise, the founder of American Reform Judaism due to the need for formal Rabbi training in the United States. The school is the oldest Jewish Seminary in the country. The school first started in the basement of the Mound Street Temple and in 1881 moved to its own building on West Sixth Street. In 1912 the school moved to its current location in Clifton. The college expanded in 1950 when it merged with the Jewish Institute of Religion in New York and in 1954 opened a location in Los Angeles. In 1963 a location was opened in Jerusalem making it the only Reform Judaism school in Israel.

Hebrew Union College focuses on undergraduate and graduate programs in Rabbinical studies, Cantorial studies, Jewish educational studies, and Jewish communal service studies. The archaeology center at Skirball Museum in Cincinnati has a large artifact collection from Canaan and Israel and the Klau Library and American Jewish Archives at the school has one of the largest collection of Jewish and Hebrew artifacts and documents in the western hemisphere. 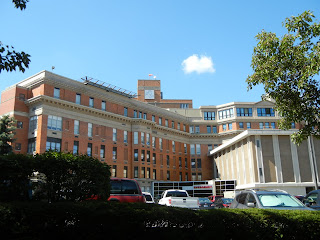 Good Samaritan started in 1852 as St. John’s Hospital for Invalids when Archbishop John Purcell donated a small hospital downtown to the Sisters of Charity to use to care for the poor. Impressed by the care provided by the Sisters of Charity, two local bankers donated a larger hospital, which was once used to treat wounded soldiers during the Civil War and it was changed to the Hospital of the Good Samaritan. In 1915 the hospital moved to its current location in Clifton and since that time it has grown to be one of the largest in the area. 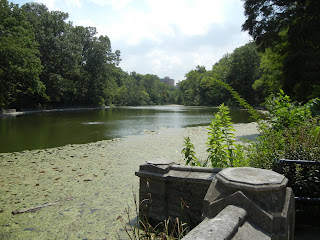 This 90-acre park was purchased in 1872 and opened as a park in 1874. The park features a fishing lake that was built in 1875, a historic bandstand that was built in 1911, hiking trails, and a disc golf course. Near the lake is the Trailside Nature Center which contains a nature library and children’s museum. Located in the nature center is the Wolff Planetarium, which is the oldest planetarium west of the Allegheny Mountains. Just outside of the nature center is a stone slide that was designed by Carl Freund and built by the Works Progress Administration.

Near Martin Luther King Jr. Drive is the H.H. Richardson monument. It is carved from 84 tons of pink granite from the former Chamber of Commerce building that was destroyed by fire in 1911. Named after the architect of the building, the monument was created by University of Cincinnati students in 1972.

Near Clifton Avenue is the Lone Star Pavilion. Dedicated in 1974, the pavilion has two cannons that were given to Sam Houston by his friends in Cincinnati for use in the battle for Texas independence.

The Audubon Society named the park an important birding area.
Posted by grif at 10:35 PM 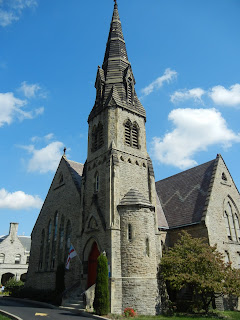 The congregation held its first services in 1844 in a small schoolhouse on Clifton Avenue. Construction of the church was completed in 1867 and was designed by architect William Tinsley. The church is a Gothic Revival design and this style was chosen to fit in with the homes in the community. Mr. and Mrs. Henry Probasco donated the tower and bell in honor of Tyler Davidson. Artist Francis Pedretti designed the interior of the sanctuary. William Burnham designed the west window and patterned it after the famed; “The Five Sisters” window in the York Cathedral. In 1886, the Calvary Church of Clifton was formed. A later addition was the Parish house and Sunday school designed by Samuel Hannaford & Sons and is on the National Register of Historic Places.