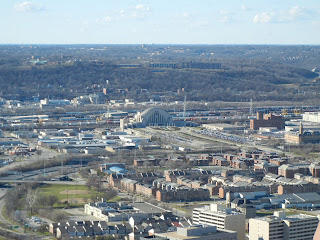 The Queensgate area has always been a center for industry and manufacturing and in the early 19th century contained many of the slaughterhouses making Cincinnati one of the largest pork producers in the country and earning the city the nickname, “Porkopolis”.

Located in Queensgate is Union Terminal. Built in 1933, the terminal once saw up to 216 trains a day. Today Union Terminal serves as the Cincinnati Museum Center as well as a train station with Amtrak service to the city.

Queensgate was also once home to the Cincinnati Reds who played at Crosley Field from 1912 to 1970. Once located at Findlay Street and Western Avenue, Crosley Field was demolished in 1972. A marker commemorating the field stands where it once was.

Once considered part of West End, the area was renamed Queensgate and industrial and commercial office parks were built in an effort to compete with office parks that were being built outside the city limits. The selling point for the area is its proximity to downtown and convenient access to rail and the freeways.

The area is also home to Queensgate Yard, which is one of the largest rail classification facilities in North America and a major rail hub in the Midwest for CSX.
Posted by grif at 10:55 PM

The Franciscan Sisters of the Poor first came to Cincinnati in 1858 to care for the growing number of German immigrants. They operated their first hospital from a small building on Fourth Street with 10 beds and donated linens. By 1859 they opened St. Mary Hospital in the West End on what was then Betts and Linn Streets. The 4-story brick hospital was designed by architect Anthony Bley and contained 325 beds. At the time of its use, it was second in the city among emergency room cases it handled. The hospital was replaced by the Franciscan (now Mercy Hospital) in Mt. Airy which opened in 1971.
Posted by grif at 10:51 PM

Click to expand image
Construction of the Miami & Erie Canal began in 1825 and was completed in 1845. At the completion of construction, the canal stretched from Lake Erie in Toledo to the Ohio River in Cincinnati. The canal was close to 300 miles long with 105 locks and ran through 35 towns along the way. Canal boats ran up and down the stretch and were pulled by mules or horses along towpaths and carried cargo and passengers to points along the way. By the early 1900’s the canal ceased operation due to the building of railroads which proved to be a more efficient means of transportation.

When the Miami & Erie Canal was discontinued it was drained and work began on a subway system in Cincinnati. This work took place between 1920 and 1925 but stopped short of completion due to a lack of funding. Although the subway never saw completion, its tunnels still exist under Central Parkway.

North of Cincinnati, parts of the canal and its locks have been preserved and can still be seen from the hiking trails, scenic byways, and parks.
Posted by grif at 9:44 AM 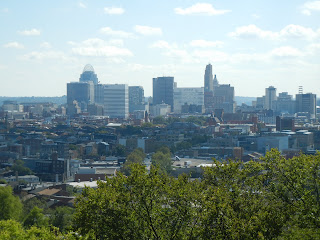 Fairview Park was established in 1931. Fairview Park Road winds its way through the park from W. McMillan Street to Ravine Street. The park is wooded with old stone walls created by the WPA in 1940. Along the winding street you will find picnic areas, a playground, ball fields, a swimming pool, a beautiful vistas with views of downtown, Over The Rhine, and the Mill Creek Valley. The old incline piers can be found and there is also a series of 200 steps leading up to the park from W. McMicken Avenue below.

Many of the parks in the city have spectacular views with each giving a different and unique perspective and this one is no exception.
Posted by grif at 10:55 PM 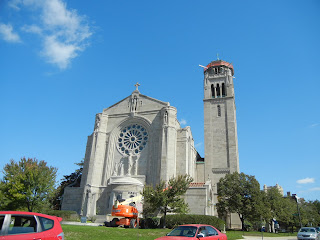 The St. Monica parish was founded in 1911. The church that stands today was designed by Edward J. Schulte and Robert Crowe and was completed in 1928 and is an Italian Romanesque style. Karl Zimmerman created the murals on the domed interior, Clement Barnhorn created the sculptures, and F.X. Zettler created the glasswork. St. Monica served as the Cathedral of the Archdiocese of Cincinnati from 1938 through 1957. In 1993, the parishes of St. Monica and St. George merged and today the church serves as the St. Monica-St. George Parish Newman Center. 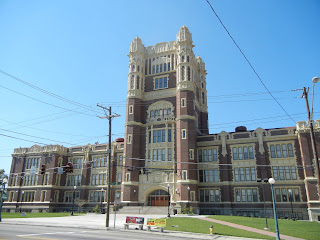 Hughes High School is the second oldest high school in the Cincinnati public school system. The school was named after Thomas Hughes, a cobbler who willed his property to the city in order to educate the poor. The original Hughes High School was built in 1853 and located on Fifth and Mound Streets. In 1910 a new school was built at the current location in University Heights. Designed by J. Walter Stevens, the school is of a Tudor Revival Collegiate with a 425-foot tower. The building exterior is lined with grotesques, which represent various disciplines like chemistry, geography, athletics, and history. The interior features colorful Rookwood drinking fountains. Over the years, the school has expanded and underwent a complete renovation in 2008.

The school also goes by Hughes Center and is a college preparatory school and has programs like STEM (Science, Technology, Engineering & Mathematics) and the Zoo Academy – a partnership with the Cincinnati Zoo that teaches students about wildlife.