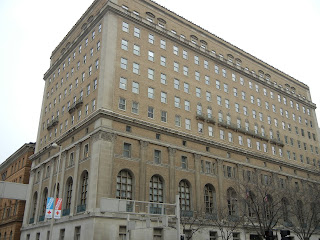 Built in 1924 and designed by Garber & Woodward, this 10-story Neo-Classical building was the home of the Cincinnati Club that formed from the Businessmen’s Club that was established in 1892.  This private club had dining rooms, a gym, Turkish bath, a bowling alley, rooms for billiards and cards, a library, reading rooms, and residential quarters for members and guests.  The building was renovated in the 1990’s and today it houses law offices and a banquet hall.  The Cincinnati Club is on the National Registry of Historic Places. 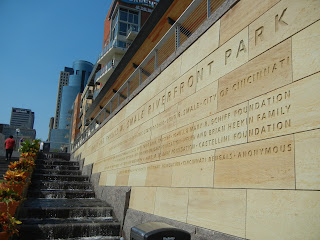 The most recent addition to the great parks in Cincinnati is the Phyllis W. Smale Riverfront Park.  The park runs along the banks of the Ohio River and Mehring Way.  Upon completion, the park will stretch from Great American Ball Park to the east and Paul Brown Stadium to the west with the Roebling Suspension Bridge acting as a centerpiece.  In all, the park will cover 45 acres of the riverfront.  The park links with Bicentennial Commons and Friendship Park to the east.

The first phase of the park has been completed and features the Schmidlapp Event Lawn & Stage, a tree grove, pathways, a section of the Ohio Bike Trail as well as The Bike, Mobility and Visitor's Center where visitors can rent a bicycle or people who commute downtown on bike can park and shower.  There are many water features in the park with colorful illuminated lights like the Walnut Street Fountains & Grand Stairway and the Main Street fountain, which welcomes visitors to cool off in the streams of water shooting out.

The first restaurant to be built in the park is the Moerlein Lager House that not only serves as a restaurant and microbrewery but as a tribute to the history of brewing in Cincinnati.

The park also features The Black Brigade Monument. It is a tribute to the first unit of African Americans who served the country in the Civil War for the Union Army. 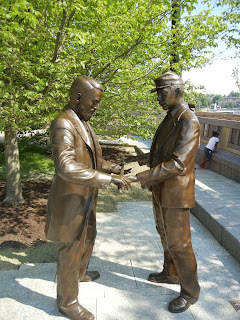 Future phases of the park will see additional restaurants and cafes, playgrounds and a boat dock as well as more trails, tree groves, and gardens.
Posted by grif at 11:05 PM 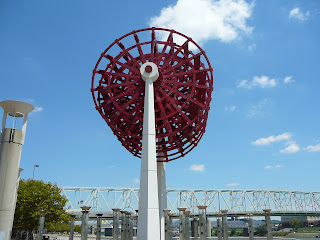 Located along Mehring Way near the Public Landing is the National Steamboat Monument.  The monument highlights the history of steamboats in a time when the river was the primary means of shipping goods.  During the peak of the steamboat trade, Cincinnati was one of the largest ports and manufacturers of steamboats.

The monument features the original paddlewheel from the American Queen, the largest steamboat ever built.  Underneath the paddlewheel is whistle grove which consists of 24 metal smokestacks that contain computer synchronized infrared sensors that play the sounds of calliopes, men working on the river, steam whistles, and songs.  Steam shoots from the top of these stacks toward the paddlewheel.  Whistle grove is an interactive experience and there is a riddle with directions and if correctly answered, patterns of lights, music, or patterns of steam will emit from the stacks.

Along the walkway leading up to the monument is the steamboat hall of fame.  The pillars contain plaques listing the famous riverboats of the time with descriptions and stories about each of them.
Posted by grif at 11:16 PM 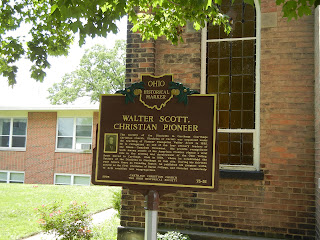