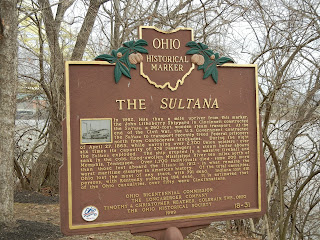 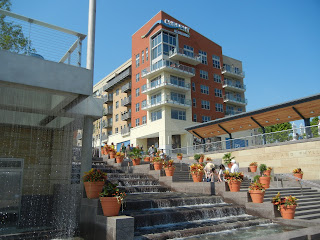 The Banks was developed as part of the Cincinnati Central Riverfront Master Plan of 1997.  It is a mixed-use development containing apartments and restaurants and is situated between Paul Brown Stadium, Great American Ball Park, The National Underground Freedom Center, and the Phyllis W. Smale Riverfront Park.  Construction of Phase I of The Banks started in 2009 with the majority of it completed in 2011.  By 2012, apartments became occupied as well as the street level restaurants.  The project has created the equivelent of 7 city blocks of parking.  The parking to the west of the completed section is exposed now but soon will be covered and act as a platform for future development.  With Phase I of the development nearing completion, Phase II will soon be starting with future development of office buildings, residential and retail units, and a hotel. 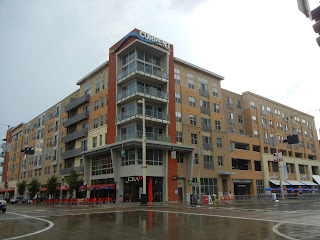 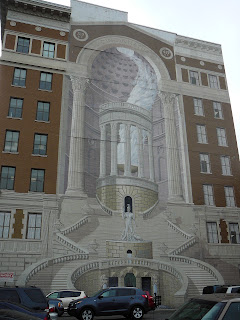 The namesake of the city, Cincinnatus was a farmer who was called to power in the 1st Century BC.  As the Roman dictator, he helped defend Rome against Aequi.  Once the threat to Rome was defeated, he gave up power and returned to his farm.

Homage to Cincinnatus is a mural by artist Richard Haas and was commissioned by The Kroger Company in 1983 to celebrate their centennial.  The mural is located on the side of the Brotherhood Building and uses a technique called trompe l'oeil, French for trick of the eye.  The mural depicts a Roman Temple with a sculpture of Cincinnatus at the base of a Baroque staircase.  From a distance the mural has a 3D feel to it and the staircase looks as if it is coming out of the side of the building.  At first glance it is difficult to distinguish between the windows that are real and the ones that are painted.  The same goes with the doors at the base of the mural.

Homage to Cincinnatus
Central Parkway and Vine Street, Downtown
Posted by grif at 9:49 AM 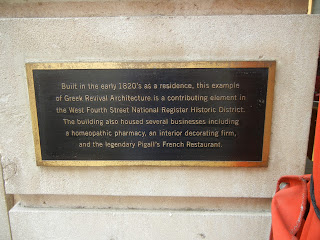 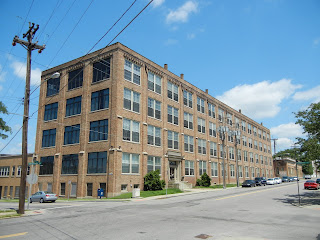 This industrial building complex is on the National Register of Historic Places and was built in 1918 for the Oesterlein Machine Company, a tool making company.  In the 1930’s Fashion Frocks, a women’s apparel company, purchased the complex.  During World War II Fashion Frocks joined the war effort and made parachutes for the military.  The buildings have been renovated and are loft apartments and the new home for the American Sign Museum. 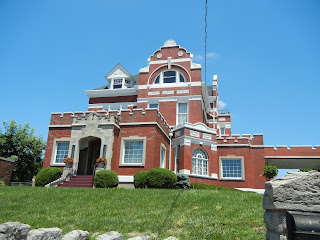 Edward J. Schulte (1890-1975) was an architect best known for his church designs.  In all, Schulte designed over 80 churches in 20 states with 4 cathedral commissions.  Schulte blended modern architectural styles with traditional styles commonly found in churches.  Schulte designed many churches around the city including Our Lord Christ the King, St. Cecilia, and St. Monica/St. George.

This was once the home of Edward Schulte.  Today it serves as a funeral home. 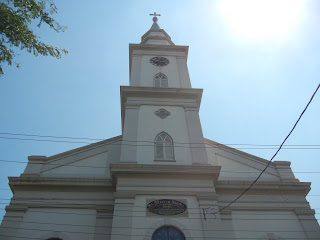 Old St. Mary’s Church was founded from the increasing number of German immigrants who came to Cincinnati in the 1800’s.  The land for the church was purchased from the estate of General Arthur St. Claire, the first governor of the Northwest Territories and the one responsible for giving Cincinnati its name.  The Greek Revival style church was designed by architect Franz Ignatz Erd.  With limited funds, the parishioners did most of the work themselves and hand made and baked the bricks at home as well as cut the trees to make the beams that support the church.  The cornerstone for St. Marien Kirche (St. Mary’s Church) was laid in 1841 and dedicated in 1842.  The first bell was cast by Levi Coffin, a leader in the Underground Railroad movement and placed in the top of the 170-foot tower in 1843.  Upon completion it was the largest church in the Ohio Valley. 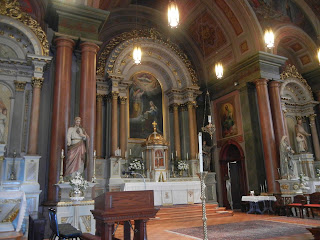 The interior of the church is breathtaking with high ceilings painted in a trompe l’oeil giving a 3-dimensional look to the panels.  The stained glass windows are from Bavaria and the walls are adorned with German paintings.  There are hand carved and painted wooden figures that fill the church and behind the main altar are three oil paintings of the Virgin Mary that stand fifteen feet tall.  The paintings are changed for the seasons and are put in place by a system of pulleys.  Under the high altar are the remains of a woman martyr or,  “Santa Martura” meaning Holy Martyr brought to the church from the Roman catacombs in 1844 by Father Clemens Hammer, the first pastor of St. Mary’s.

In 1904, the church changed its name to Old St. Mary’s when St. Mary’s in Hyde Park was founded.  Old St. Mary’s is the oldest standing church in Cincinnati and still offers mass in German as well as Latin and English.  The church is on the National Register of Historic Places.