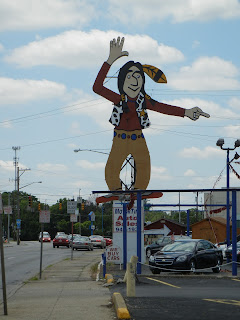 This sign has been a roadside landmark for almost 60 years now.  The sign was put up in 1954 for the Pontiac dealership that was once there.  The 50-foot image became known as Chief Pontiac.  At one time the sign was trimmed in neon and the arm would move waving to passing motorists.  “Where Paddock Meets Vine at the Big Indian Sign” became a popular catch phrase for any of the automobile dealerships that have been at this location.  The sign no longer lights up and due to zoning, the arm has been made stationary but it still stands at the same location.  The catch phrase still guides motorists to its location in Hartwell.