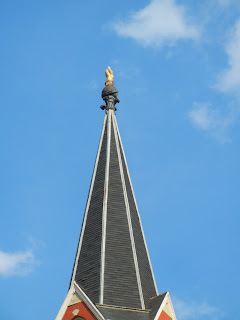 The congregation of Philippus Kirche formed in 1890 from members of St. Mattheus Church.  This Gothic Revival church designed by Anthony Kunz was completed in 1891.  This church has recessed arched windows on the outside with beautiful stained glass on the inside as well as an organ that was donated by the family of Christian Moerlein, a member of the congregation.  The most unique feature of the church is the gilded hand with an index finger pointing to heaven.  In 1968, a soldier’s helmet was placed on top of the cross above the entrance to the church to honor the members of the congregation who had served the country in time of war.

Email ThisBlogThis!Share to TwitterShare to FacebookShare to Pinterest
Labels: Over The Rhine, Places of Worship 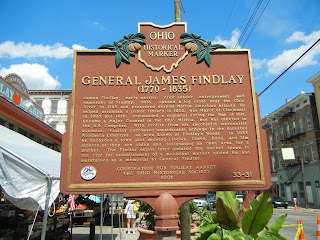 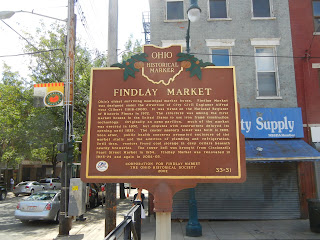 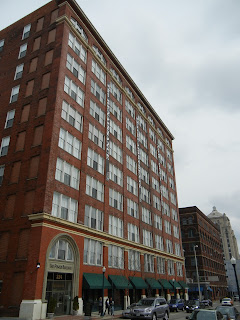 The building is on the National Register of Historic Places as part of the East Manufacturing and Warehouse District, an area significant for late 19th and early 20th century manufacturing in the city. 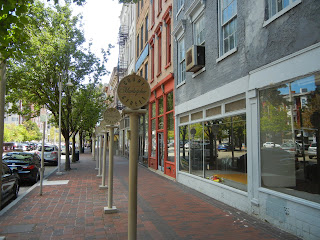 At one time Cincinnati had nine public markets with the Court Street Market being one of them.  The Court Street Market was built in 1864 to replace the Canal Street Market.  Court Street was widened and the wooden building for the market was built in the center of the street between Vine and Walnut.  Beneath the market building was a tunnel lined with stone that was used to run hogs to the slaughterhouses and during the court house riots of 1884 residents of the city used the tunnel to hide from the violence on the street above.  The market was closed in 1912 due to unsanitary conditions and the building was demolished in 1914.

There are now parking spaces where the market building once stood and a variety of restaurants and shops can be found as well as a farmer's market during the summer.  Some of Cincinnati's popular restaurants can be found here as well as Avril-Bleh & Sons who have been in business in Cincinnati since 1894.
Posted by grif at 10:29 PM

The Vision of Samuel Hannaford 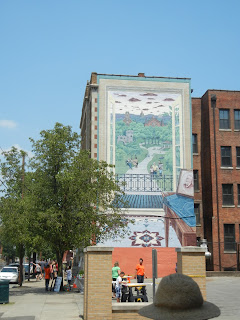 This ArtWorks mural pays homage to architect Samuel Hannaford and depicts a room with a portrait of Samuel Hannaford with an open balcony overlooking Washington Park.  The surrounding area in the mural shows some of the great works of Hannaford like the Elsinore Arch, City Hall, and Music Hall.

The Vision of Samuel Hannaford
1308 Race Street, Over-The-Rhine
Posted by grif at 10:07 PM

Email ThisBlogThis!Share to TwitterShare to FacebookShare to Pinterest
Labels: ArtWorks, Murals, Over The Rhine 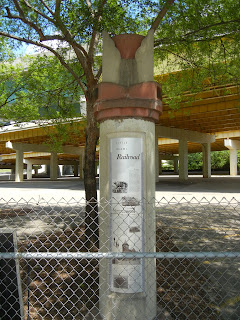 The Little Miami Railroad, chartered in 1836, was the first railroad to server Cincinnati; it began service between the city and Milford on December 14, 1841.  Eventually, the Little Miami provided an important link between southwestern Ohio and the communities further to the east, but in its early years, the line could not come all the way into Cincinnati.  City Council prohibited the new, dirty, and potentially dangerous means of transportation from coming inside city limits.  Therefore, the railroad’s yards, workshops, and first passenger depot were in Pendleton, a community that is part of the present-day East End.  Passengers rode into Cincinnati in horse-drawn omnibuses or in train cars pulled by horses.

Building the railroad was extremely expensive, and by 1842, the Little Miami was bankrupt.  A $100,000 loan from the City of Cincinnati and the able management of banker and steamboat owner Jacob Strader reversed the company’s fortunes.  Around 1844, the railroad built a new depot at East Kilgour and Front Streets, along the riverfront.  The law prohibiting locomotives inside the city was lifted in 1845.  The construction of these facilities marked the beginning of the Cincinnati riverfront’s role as a key link in the area’s railroad network.  By 1847, the Little Miami carried more than 78,000 passengers, used fifteen locomotives, and had a net profit of $112,000.

The Little Miami Railroad stimulated residential and commercial development in the villages east of Cincinnati.  Commuter suburbs developed in rural villages as land was subdivided, and factories and warehouses went up along the rail line.

In the late 1860s, the Little Miami took over two smaller lines in eastern Ohio, and then in 1870, was itself leased by the Pittsburgh, Cincinnati, Chicago & St. Louis Railroad.  In the 1920s, the Pennsylvania Railroad took over the PCC&StL. Passenger and freight stations in Cincinnati were closed when Union Terminal opening in 1933 and were finally torn down for clearance of the riverfront and urban renewal in mid-century.

By the 1980s, the growing use of the riverfront district for recreation purposes led to the reduction of rail activity in this vicinity.

A Seventy-Foot Love Letter to the Queen 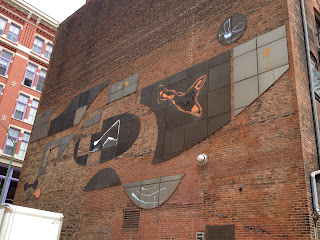 Located on the side of the Cincinnati Athletic Club building along Rusconi Place, this mural was created by artist William Schickel and commissioned by the city in 1977.  The mural is made of anodized aluminum and fluid enamel.  The curvilinear shapes of the mural were cut from 4 by 4-foot heat-treated aluminum panels painted in earth tones and scribbled with liquid enamel to represent the Queen City of the West.  The mural was elevated so that it could be seen from the skywalk.  The work not only makes use of these panels but are spaced apart to include the weathered brick wall as part of the work.

Not part of the mural but located directly below it on opposite sides of the wall are two articles from the Cincinnati Enquirer printed on metal plates.  The first article from 1903 commemorates the opening of the Cincinnati Athletic Club and the other from 1965 tells the story to how Rusconi Place got its name. 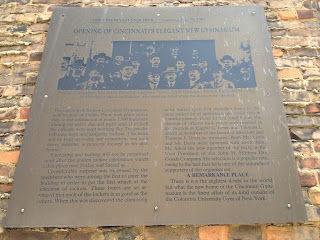 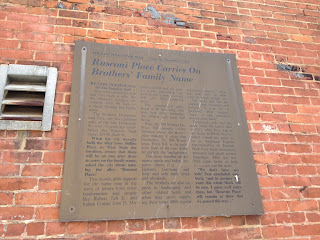