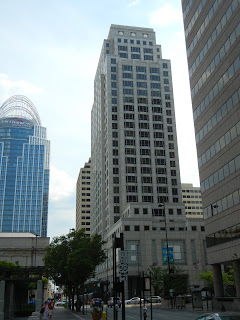 Once known as the Chemed Center, this building was named the First Financial Center after First Financial Bancorp moved to this location in 2011.  This postmodern 32-story building was designed by Skidmore, Owings & Merrill and built in 1991.  The building has a gray granite exterior with a 2-story atrium and the top of the building is adorned with sculpted diamonds that are lit up at night. 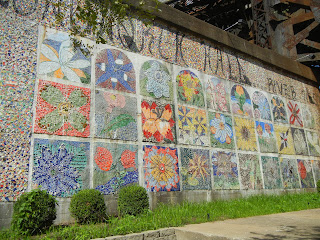 This project was started in 2004 by the Cincinnati Arts & Technology Center and Cincinnati Public Schools.  Students worked along with artists to turn unused abutments under the railroad tracks in the Longworth Hall parking lot into works of art.  The first to be completed was a glass and tile mosaic with floral patterns (shown above).  Projects that followed included a water themed mosaic with fish, seagulls, and flamingos as well as an abstract mosaic (below) and a painted mural of Cincinnatus with brightly painted tunnels. 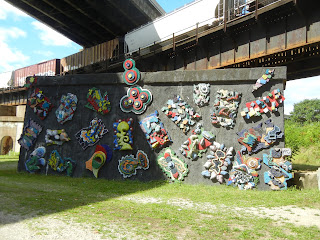 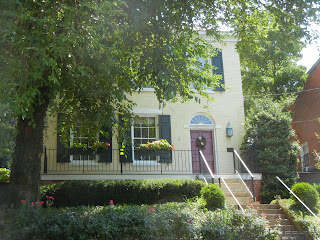 Samuel Burdsal, a pioneer pharmacist built this home in 1834 for his family after his marriage to Mary Ann Turner.  This Federal style home was built in what was once the outskirts of the city was also a popular gathering place for many of Burdsal’s acquaintances which included lawyers, judges, military generals, governors, and General William Henry Harrison who later became President.  Samuel Burdsal lived in the home up until his death in 1888.

The home is also known as the Mushkat-Burrow House and is the oldest continuous residence in Cincinnati.  It is on the National Register of Historic Places. 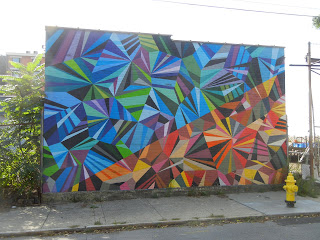 Matt W. Moore is the founder of MWM Graphics in Portland, Maine.  Moore is an artist who creates digital illustrations, watercolor paintings, and murals and his exhibits can be seen all over the world.

In 2011, Moore did a residency at YES Studio in Cincinnati making it his first exhibition in Ohio.  During this time he created this mural titled, “Hot VS. Cold” on the side of a building on Clay Street in Over-The-Rhine.  The mural was created using spray paint in his signature style of, “Vectorfunk”.  As Moore describes it, “The goal with each work is to have the viewer’s eye fall into the piece and get lost in the optical illusions, trying to figure out what is up, down, left, and right.”

Email ThisBlogThis!Share to TwitterShare to FacebookShare to Pinterest
Labels: Murals, Over The Rhine 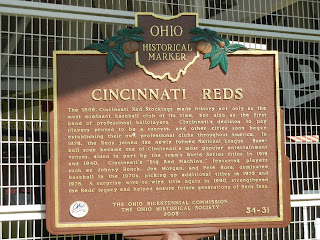 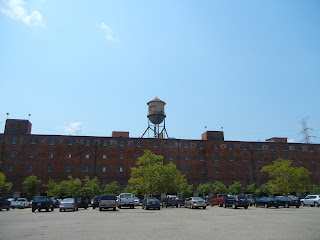 The building was built in 1904 on land once owned by Nicholas Longworth.  The building was first used as a freight terminal for the Baltimore & Ohio railroad.  Over ¼ mile in length, the building contained an inbound freight house on the lower level and the upper floors were used for storage.  There was also a boiler house, roundhouse, and coal triple.  The building could accommodate up to 125 rail cars at any given time.  The building is a Romanesque Revival style structure designed by M.A. Long and is similar to its sister building Camden Yards in Baltimore.  At the time it was built, it was the largest structure of its kind in the world and today is still one of the longest buildings in the United States.  The building is on the National Register of Historic Places.

The building was purchased in 1985 and converted into an office building.  Today it houses many types of businesses including design firms, tech firms, restaurants, and clubs.