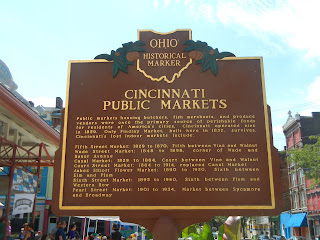 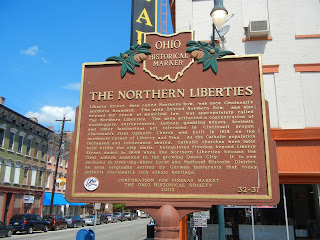 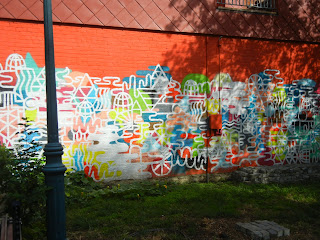 This colorful mural was created by Brooklyn-based artist Mike Perry in 2012 when Perry was in town along with Naomi Reis for their exhibit Night and Day at the YES Gallery in Over-The-Rhine.  Mike Perry is an artist with work ranging from paintings to illustrations for anything from nonprofit to commercial.

This mural is located on Clay and Melindy Streets across from the Matt W. Moore mural.
Posted by grif at 10:52 AM

Email ThisBlogThis!Share to TwitterShare to FacebookShare to Pinterest
Labels: Murals, Over The Rhine 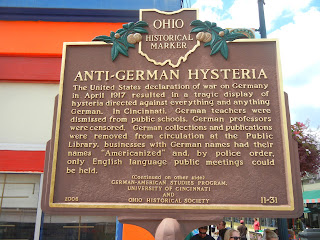 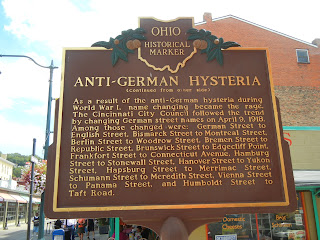 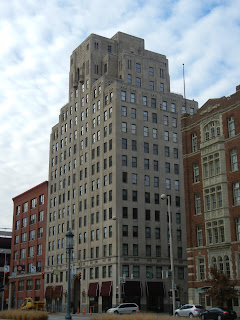 This Art Deco building was completed in 1928 and designed by architect Joseph G. Steinkamp and his brother Benjamin Steinkamp.  The building was built in anticipation of the completion of the subway and Central Parkway – both becoming major modes of transportation in the city.  It was one of the first Art Deco buildings in Cincinnati and many features of this style can be found throughout the building from the stonework, arches, the balconies on the upper floors, and the lobby ceiling.  At 18-stories, it is the tallest building in Over-The-Rhine.  It was originally built as an office building but in 2004 it was renovated and turned into condos. 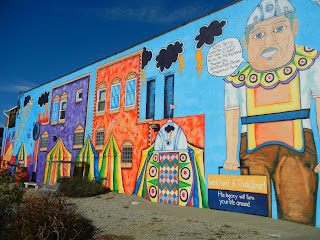 Raymond Thunder-Sky was a local artist who could be seen walking around town dressed in a clown collar or suit wearing a hardhat and carrying a toolbox filled with art supplies.  He had an interest in construction and demolition sites and could be found at various sites in Cincinnati drawing these sites.  These colorful drawings often included Raymond’s own vision of what would become of these sites from amusement parks to clown costume factories.  Raymond passed away in 2004 but his legacy lives on with his works displayed at Thunder-Sky, Inc. in Northside – a gallery made in his honor.  Raymond Thunder-Sky created over 2,000 drawings and his work has been displayed in galleries and museums all over the world. 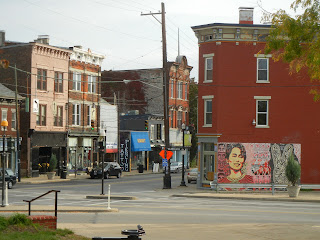 Northside started as a small settlement in Native American territory back in the 1790’s and is located on what was once two Native American trails.  With the building of the Miami-Erie canal in the 1820’s, the population grew and the town of Cumminsville was founded by Ephraim Knowlton, the supervisor of the building of the Miami-Erie canal.  Cumminsville was named after David Cummins, one of the original settlers in the area.  The population increased even more with the building of the Cincinnati, Hamilton, & Dayton Railroad.  The town was often referred to as, “Hell Town” due to the numerous bars and drinking which resulted in drunken fights.  The town also held another nickname of, “Happy Valley” most likely for the parade of circus animals and performances that would take place on the circus grounds in the area.  Cumminsville was annexed by the city of Cincinnati in 1873.  Knowlton’s Corner in Cumminsville was once one of the busiest commercial areas in Cincinnati. 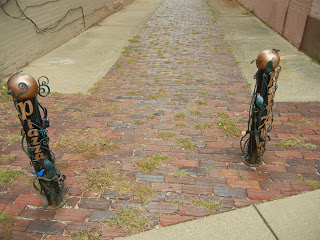 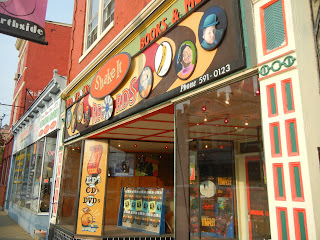 Nowadays Northside is a vibrant and diverse community.  Along Hamilton Avenue is the business and historic district.  Here you will find many independently owned businesses from shops with local goods to foodstuffs, art, and restaurants.  Northside has a strong music scene with many local and regional bands playing at various establishments in the area.  Northside also has parks, community gardens, and various co-ops throughout as well as many popular events like the Northside Farmer’s market, Northside Rock ‘n Roll Carnival, and the Northside Fourth of July Parade - a long running parade that started in 1854.

A map of the Northside businesses can be found here.
Posted by grif at 10:39 AM

Email ThisBlogThis!Share to TwitterShare to FacebookShare to Pinterest
Labels: Northside 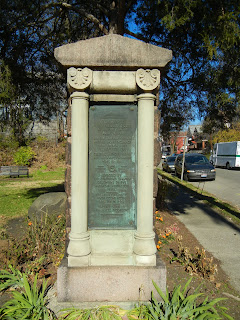 Near this spot stood the block house at Ludlow Station built in 1791.

General Anthony Wayne and his army encamped here in 1793.

Erected by The Cincinnati Chapter Daughters of the American Revolution – 1916.

Pillars and granite from Court House rebuilt in 1884.

Ground given by Mr. Samuel Molyneux.