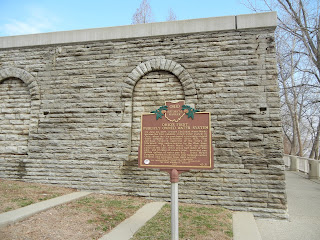 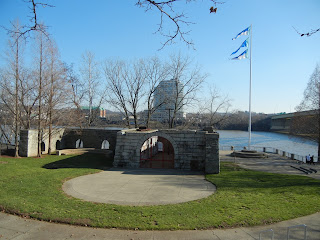 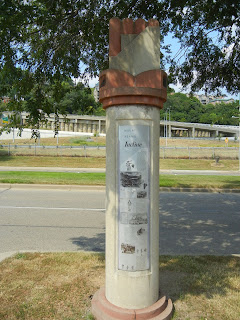 From 1800 to 1830, the steep hillside land that lay between the downtown basin and the Kemper family’s Walnut Hill farm was occupied only by stone quarries and a few scattered house.  In 1830, Nicholas Longworth acquired a great part of the property in the area.  He created a vineyard that he called the Garden of Eden and later, he donated the piece of the land for the Cincinnati Observatory.  Other speculators began laying out streets and dividing their holdings into building lots in the mid 1840s.  But the area was difficult to reach – the few roads that went up the hillside were too steep for horse-drawn streetcars to ascend and descend safely.

In 1874, the construction of the Mt. Adams Incline, which ran from the foot of the hill up to Celestial Street, made the area more accessible to the working families anxious to move away from the smoky, crowded basin.  The incline consisted of platforms drawn up and down two parallel tracks by a stationary steam engine; it carried both passengers and freight.  At the end of the 1870s, the incline began to carry horsecars, becoming a link in the streetcar line system that ran from downtown to Mt. Adams and Walnut Hills.

With the accessibility brought by the incline, Mt. Adams experienced a building boom between the 1870s and the 1890s.  Its streets were quickly lined with the modest brick and frame houses of lower middle-income families and a variety of neighborhood institutions, including churches, bakeries, saloons, groceries, a savings and loan, bowling alley, and firehouse.  The incline took workers to and from their jobs in the factories and yards in the basin and Deer Creek Valley. 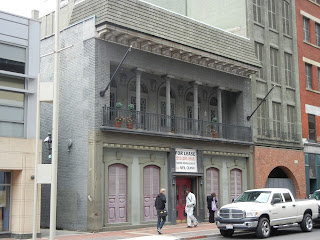 The building at 114 East Sixth Street was once home to The Maisonette, the longest running 5-star restaurant in North America.  The Comisar family opened the Maisonette in 1949 at a location on Fifth Street.  It moved to the Sixth Street location in the 1960’s.  The restaurant was known for its fine French cuisine, exceptional service, and décor.  For 41 consecutive years until it’s closing in 2005, the restaurant received a 5-star rating from the Mobil Travel Guide.  Local favorite, Chef Jean-Robert de Cavel, was chef de cuisine at The Maisonette from 1993 until 2001 when he left to open his own restaurant, Jean-Robert at Pigall’s.  Also located in the building directly below The Maisonette was La Normandie, a restaurant and tavern and another local favorite.

The building will be the future home of Boca, a restaurant that is currently in Oakley and is operated by Chef David Falk who once worked at The Maisonette.
Posted by grif at 11:21 PM 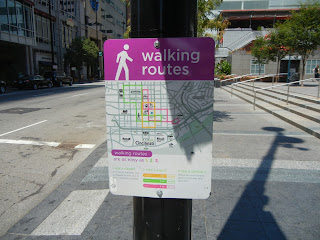 go vibrant is a not-for-profit group in partnership with organizations and companies in the Cincinnati area.  Their goal is to make Cincinnati one of the top 10 healthiest cities in 10 years.  This is done through sponsoring activities like walking groups, events, and by promoting an active lifestyle.  The group has also implemented a 1, 2, and 3-mile walking route through downtown and has recently implemented walking routes through Mt. Adams.  On the days when the weather is not cooperating there is even an indoor route using the Cincinnati Skywalk system.  Each route is marked with colorful signs that display a map of the walking routes as well as directional signs along the way.  It is not only a great way to get some exercise, but a really great way to see the sights of the city as well. 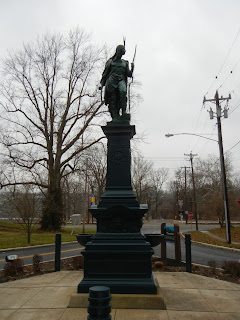 The Sayler Park Indian Statue is located in Thornton Triangle, the smallest of Cincinnati’s parks at 1/10th of an acre.  It was erected in memory of John Fitzhugh Thornton by his wife Eliza in 1912.  Made of a zinc composition with a cast iron pedestal, it was created by the J.L. Mott Foundry of New York and based off of a design by Samuel Anderson Robb.  The statue was sold in catalogs as #53 Indian Chief.  There eight others like it in the United States.  The statue in Sayler Park also goes by the names J. Fitzhugh Thornton Memorial, the Fernbank Indian, and Tecumseh after the Shawnee leader who led the resistance against white settlers expanding into the Ohio region.

This statue has survived the 1937 flood as well as damage by cars.  In 1940 the statue was struck by a car and thought to be beyond repair.  It was sold to an antiques dealer for $10.  After a public outcry, funds were raised and the statue was bought back from the dealer.  In 1965 it was once again hit by a car but this time the statue was repaired right away.  In 2002 the statue was refurbished and rededicated in 2003. 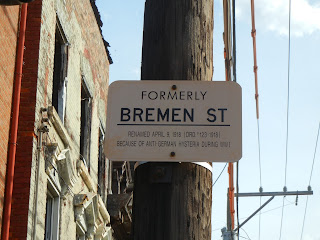 Starting in the 19th century, Cincinnati became home to many German immigrants.  By the start of the 20th century over half of the city’s population was German.  There were many German businesses, German language newspapers, and German was spoken in schools and churches in the area.

With the start of World War I, anti-German hysteria hit the city.  With this anti-German sentiment, the city banned the teaching of the German language in schools, German language publications were removed from the public libraries, and many German businesses change their names to more American names to avoid being a target for the hatred displayed toward Germans.

In 1918 the city issued an ordinance to change the German influenced street names to a more American or English sounding name.  The streets that changed are:

In 1995 at the request of the German-American Citizens League the city placed markers at each of the streets to commemorate the original German street names and to preserve the German heritage of the city. 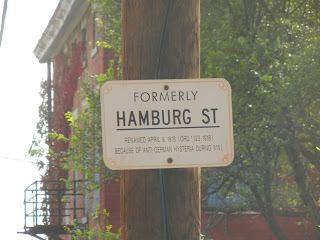 Many of these honorary signs still stand today.  On the northeast corner of 15th and Republic you can still find the name Bremen Street etched into the side of the building. 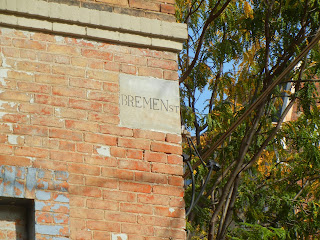 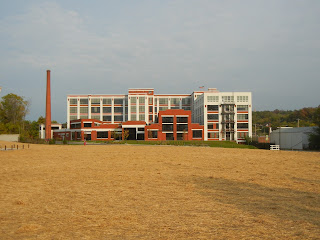 Built in 1921, this Early Commercial Style 5-story building was designed by architect C.G. Preis.  It is made primarily of concrete and brick and covers around 120,000 square feet.  It was built for the American Can Company, one of the country’s largest can manufacturers.  The can making machinery was built in this facility.  The company stopped operations in 1963 but a few years later the building was reopened and used by the Cleveland Automatic Machine Company, which operated in this building until 1978.  Over the past several decades the building was used on and off by smaller companies but stood vacant for the most part.

In 2005 plans for clean up and renovation of the building began and by the end of 2011, developers Bloomfield/Schon + Partners converted the building an its space to 110 loft style apartments along with 12,000 square feet of commercial space.  The apartments have high ceilings and thick concrete floors and many of the original factory features remain including the fixtures and equipment that are used for furniture and décor.  The building is part of a mixed-use development in Northside called Factory Square.

The American Can Building is a Cincinnati Historic Landmark and is on the National Register of Historic Places. 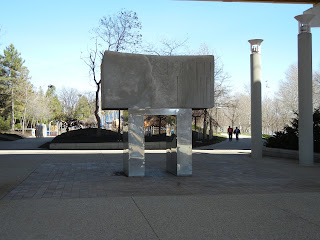 This sculpture was commissioned in 1972 by the Fountain Square Sculpture Fund with a gift donation from Charles Sawyer to commemorate the Cincinnati Bar Association's 100th anniversary.  It was created by Barna Von Sartory, a Berlin based sculptor who won the competition to create the sculpture.  It was made from a 34-ton block of limestone from Bedford, Indiana.  The original shape and contours of the cut block were maintained and parallel lines were etched into the stone.  It rests on a polished stainless steel base with an archway in the center to invite the public to walk through.  When asked to describe the work, Barna Von Sartory said, “The upper part is society, very natural, left in a raw state. The lower portion represents the intellect, or, in this case, what the law has accomplished. With the lower “doorway,” people can enter into society.”

The sculpture was created on Fountain Square for the public to see and was displayed there until it was eventually moved to Bicentennial Commons.
Posted by grif at 10:37 PM 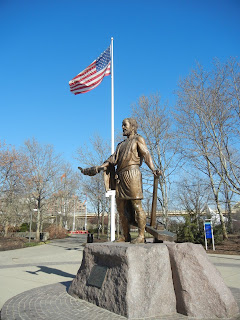 This bronze sculpture with a granite base was designed by Eleftherios Karkadoulias and dedicated in 1988.  It stands in Bicentennial Commons near the base Purple People Bridge.

The legendary Roman is seen here after he had defeated the Aequians and rescued the trapped Roman army.

With one hand he returns the fasces symbol of power as appointed Dictator of Rome. His other hand holds the plow, as he resumes the life of a citizen and farmer.

Our city was named in 1790 by Governor Arthur St. Clair, member of the Society of Cincinnati, an order of Revoltionary War Officers whose first President was George Washington.

Given to the city to honor the volunteer spirit of the citizen-soldier, Cincinnatus, by members and friends of Cincinnatus Association.