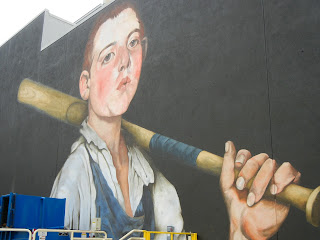 Located one block from Great American Ball Park at The Banks, this ArtWorks mural combines the work of local renowned artist Frank Duveneck and the city’s love of baseball.  The mural is based on Duveneck’s painting, The Cobbler’s Apprentice with the addition of the boy holding a baseball bat.  The original painting can be seen in the Taft Museum of Art. 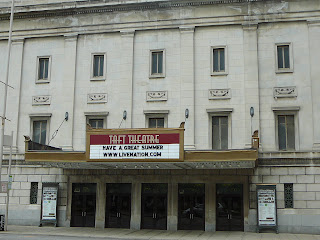 Built in 1928 the Taft Theatre was named for Charles Phelps Taft, the older brother of President William Howard Taft and a contributor to the construction of the building.  The theatre is part of the Cincinnati Masonic Center complex and is owned by the Scottish Rite of Freemasonry.  The theatre has a Greco-Roman décor with a 2,300-seat theatre as well as a 500 seat ballroom on the lower level.  The theatre was refurbished in 2011 with air conditioning added and the original murals and chandeliers kept intact.  The theatre holds a variety of events throughout the year and is home to the Children’s Theatre of Cincinnati. 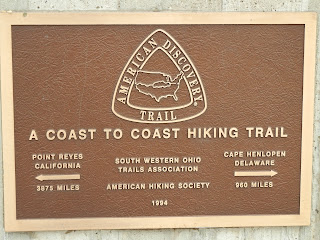 American Discovery Trail is a system of over 6,800 miles of trails stretching across the country from Cape Henlopen State Park in Delaware to Point Reyes National Seashore in California.  The system of trails connects 5 national scenic trails, 12 national historic trails, 34 national recreational trails, as well as many local and regional trails passing through many cities, national parks, and national forests along the way.

The trail enters Cincinnati from Fairfax into Eden Park and into Mt. Adams.  From Mt. Adams the trail leads into Bicentennial Commons and through Yeatman’s Cove (where the marker shown above can be found).  The trail continues on across the Roebling Suspension Bridge into Covington through Mainstrasse, through Devoe Park and crossing the Ohio River once again on the Anderson Ferry.  The trail exits Cincinnati passing the tomb of William Henry Harrison and onto Indiana.
Posted by grif at 9:29 AM 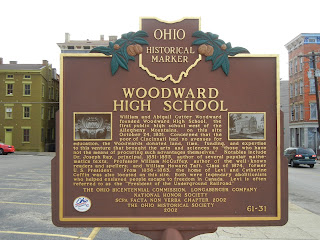 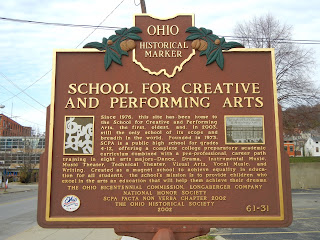 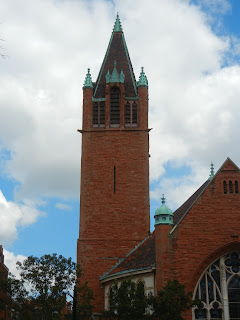 Across from Washington Park is the First English Lutheran Church.  The church was organized in 1842 by German-Americans who wanted to have a church where their children could learn English since most of the churches held services in German.  The church was built in 1894 and designed by architects Crapsey and Brown.  The building contains many Gothic features such as the large arched window while the 130-foot tower is of a Romanesque style. 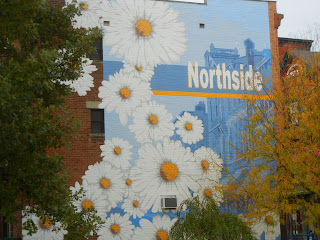 Dedicated in 2008, this ArtWorks mural depicts flowers with a background of historic buildings in Northside.  It is visible from Hoffner Park. 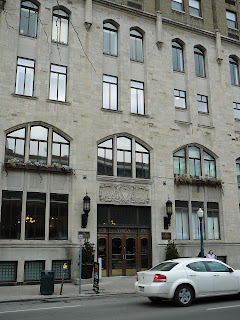 Also known as the Walnut Towers, this building was built in 1929 and designed by architects Rendings, Panzer, & Martin.  This 13-story neo-gothic building has been the home of the Cincinnati YWCA since it’s completion.  It not only served as the recreational facilities for the YWCA but it also contained lodging for 300 women.  The building was renovated in 1984 by GBBN Architects and the upper floors were converted into 104 apartments.  It still serves as the headquarters, meeting place as well as a recreational facility for the YWCA with a fitness center, basketball court, and indoor pool.  The Women's Art Gallery is also located here.  It is on the National Register of Historic Places.

The Cincinnati YWCA was founded in 1868 and was the fifth association in the United States.  The YWCA mission is to address the needs of women in the area through a variety of causes from employment to housing and is a champion of eliminating abuse toward women.