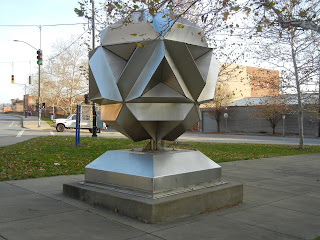 Created in 1998 by Patricia A. Rennick, this stainless steel sculpture gets its name from the number of identically folded panels or modules.  It is located in a pocket park in the Brighton area, which is home to a small arts community.  The sculpture can be found between Central Parkway, Central Avenue, and Brighton Place.
Posted by grif at 9:27 PM 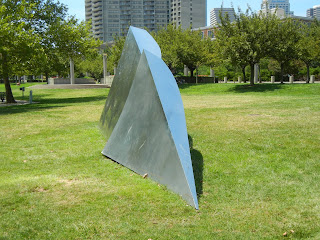 This stainless steel sculpture is located in Bicentennial Commons at Sawyer Point near the Serpentine Wall along the Ohio River.  Created by abstract sculptor David von Schlegell in 1980, this piece represents the spirit of those pioneers during the expansion to the west and the role that Cincinnati played in it.  The sharp edges of the sculpture are said to symbolize a farmer’s plow or a boat and sail.
Posted by grif at 9:09 PM 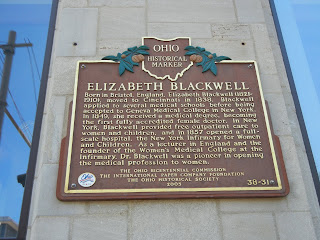 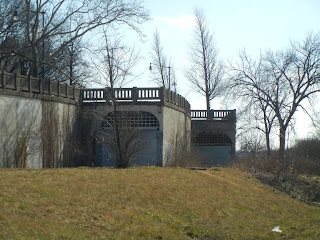 By the end of the 19th century, trains became the preferred method for transporting goods across the country.  With this change came the demise of the canal system making the Miami-Erie canal obsolete.  The partially drained canal beds held stagnant water and became a health hazard.  In 1884, the Cincinnati newspaper, The Graphic published an illustration of a train system built in the canal beds underneath a grand boulevard.  It was this illustration that sparked discussion into turning the unused canal into a subway system.  The first subway plan was put together in 1912.  The plan called for a 16-mile subway system that would run the course of the canal, up to St. Bernard (where I-75 now runs), through Norwood (where the Norwood Lateral is now located), over to Oakley, through Evanston and Walnut Hills (where I-71 is now), and make its way back to downtown.  A $6 million bond issue was passed by voters in 1916 but with the start of World War I, construction of the subway system would not start until 1920.  At the end of the war inflation drove up the costs of construction and the money that was raised from bonds did not last long.  The tunnels under what is now Central Parkway were completed as well as several miles of the right of way and a tunnel underneath Hopple Street.  Construction of the subway reached as far as Norwood when the money ran out in 1927.  A study in 1928 concluded that it would cost an additional $9-10 million to complete the subway.  By this time, public interest declined and the popularity of the automobile increased.  Central Parkway opened to automobiles in 1928 and the subway beneath it never saw a single track, train, or passenger.

Since the end of construction there have been many ideas as to what to do with the abandoned subway tunnels.  In the 1950’s a section of the subway tunnels was converted into a bomb shelter.  Currently there is a water main that runs through the tunnels under Central Parkway.  From time to time there are proposals to use the tunnels as part of a subway or transit system but none of them have come to be.  The tunnels and stations still lay under Central Parkway in good condition and there are still many parts of the subway system that can be seen above ground like the concrete railing found along Central Parkway near Brighton and the portals to the subway tunnels visible on I-75 near the Western Hills Viaduct.