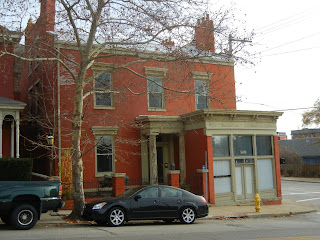 In 1879, Walker’s nephews started their own brewery in the West End called The Walker Bros. Brewery, also known as The Champion Ale & Porter Brewery.  This brewery lasted only a few years before closing.

The brewery structures are no longer standing but the home that John Walker built is still located on the northeast corner of Sycamore Street and Liberty Street.  John Walker built the home in 1847 and his nephews added the storefront in 1861 and used it as an apothecary.  The home is on the National Register of Historic Places.
Posted by grif at 6:07 PM