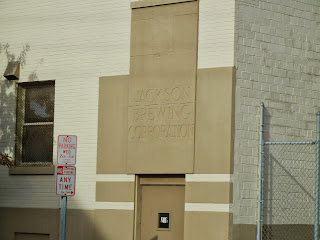 The history of brewing at this location can be traced back to 1829 when a German man named Schmeltzer starts the Andrew Jackson Brewery.  It is the oldest recorded site for commercial brewing in Cincinnati.  The brewery was sold to the Kleiner brothers in 1832 and is named The Jackson Brewery.  In 1873 George Weber takes over the brewery and in 1884 becomes the George Weber Brewery.  On July 4, 1887 a stray Roman candle ignites the malt house and burns the brewery to the ground.  George Weber declares bankruptcy and sells the brewery.  What remains is sold and once again becomes the Jackson Brewing Company.  It operates under this name until Prohibition sets in.  After Prohibition the brewery is purchased by the Squibb-Pattison Breweries out of Detroit.  Unable to become profitable, it is sold in 1934 and once again becomes The Jackson Brewing Company operating under this name until it closes in 1942. 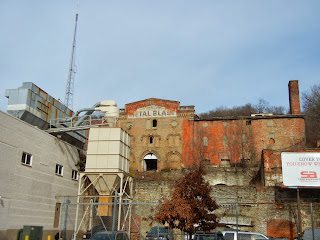 The main brewing facility is known as the Metal Blast building from the company that once occupied it.  The facility was recently purchased by a group called Grayscale Cincinnati and plans to turn the old brewery into a theater for live performances, a music venue as well as space for a craft brewery, winery, or distillery complete with a tasting room.
Posted by grif at 12:38 PM